Is Your College Professor Autistic? This May Explain a Lot


One of my friends, who is a dean of instruction, recently brought to my attention the prevalence of
faculty members on the Autism Spectrum. She thinks this explains a lot of the interpersonal and communication problems she see among them.

It might be fun for the conservative students everywhere to do a quick survey of where their liberal professors stand on the Autism Spectrum. They can code for problems in social communication and social interaction, and restricted, repetitive patterns of behavior, interests or activities. Off the top of my head, I would think at least 20% of the professors I know are probably on the Autism Spectrum.

It may be that a peaceful, quiet, low stress college campus is the ideal environment for a high functioning individual. Check out this article from CBS News for more details.


Is Your College Professor Autistic?

There is also some evidence that some of our top geniuses would have been on the Autism Spectrum too including Albert Einstein, Amadeus Mozart, Sir Isaac Newton, Charles Darwin, Thomas Jefferson, and Michelangelo.

Here's some more tips. Look for people who are unusually uncomfortable with loud noises, go without food or have odd eating habits, and those who find it difficult to establish friendships or romantic relationships.

Hot On Quora: Is Trump Sorry the Issues He Ran On Are Not More Firmly Based on Facts or Science?


Trump appears to want to be "popular". Do you think Trump now wishes he had campaigned on policy positions that were more soundly grounded on science and fact? Or, could he have been elected otherwise?

Trump won by leading a political realignment. In short, he argued for policy positions which pealed off white working class voters who had previously been voting for Barack Obama. Among the issues which attracted these voters to the new Republican party were 1) a crack down on illegal immigration, 2) a promise to end the federal government’s hostility to coal mining, and 3) a focus on using U.S. tariffs to protect U.S. workers and bargain for better treatment in international markets.

The Democrats made things worse for themselves by leaning so hard on their standard identity politics agenda that they ended up suggesting with great seriousness that all white people, including the white working class, was benefiting unfairly from “white privilege.”

In the mouths of some Democratic party stalwarts, this white privilege message appeared to be little more than an expression of anti-white hate. I have no doubt that apparent Democrat party hostility to the white working class, particularly white working class men, was a major motivating factor among the late deciding swing voters in the upper Mid-West who tipped the Electoral College to Donald J. Trump. Frankly, if you have ever spent much time hanging out with identity politics activists or leftist college professors, then I think you will understand that white, working class swing voters where perhaps right to reject a political party which contains many people who view them with contempt and disdain. In this sense, Hillary’s campaign was a high flying car wreck like that pictured below. 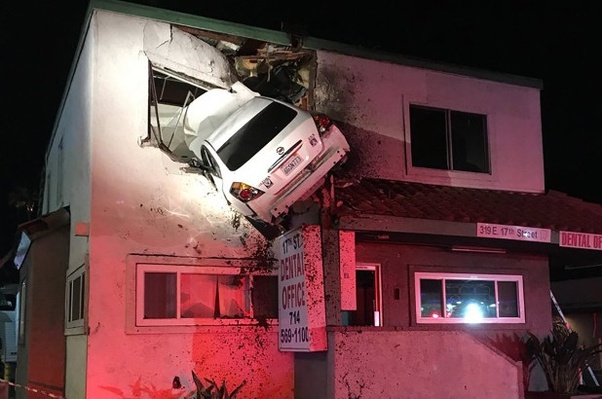 Your question seems to imply that the key issues which are at the heart of this political realignment are not properly grounded in fact or science. As a practical matter, I cannot imagine that Trump is second guessing himself on the worthiness of these policy questions. I’m sure he is just happy to be president. Moreover, there are a ton of Republicans who are also really happy that he is president too. Thanks to his victory, the Republicans have their highest level of dominance in our government since the 1920s.

Many of them, no doubt, greatly feared a second Democrat party president in a row. This is because Hillary would have never appointed to the Supreme Court someone who actually took the constitution seriously and made their decisions based on an originalist interpretation of the document. For many of them, this last election appeared to be an existential crisis for both white dominance in the U.S. and the survival of our U.S. constitutional system. The fear I heard expressed at Republican functions was that a Clinton victory would lead to an influx of immigrants - both legal and illegal - who would vote for socialism, affirmative action, redistribution, and efforts to undermine “white privilege” broadly and unfairly understood. The result would be a nation that looked like California, a state where the Republican party and white evangelical Christians have virtually no say in the laws (or taxes) which seem designed to humiliate and financially harm them, harm them enough at least to cause them to exit the state and move to TX.

That being said, I’m not so sure that the policy positions that Trump used to bring about this historic electoral realignment are all that bad from the view point of either science or fact. For example, there can be no doubt that increased immigration (legal or not) reduces the wages of the white working class. Moreover, increased immigration means that white working class voters will find themselves increasingly surrounded by people of different races and nationalities who do not share traditionally common American beliefs including the elevation of the Bible over the Qu’ran. Increase immigration harms the white working class by surrounding them with people from different cultures who are in fact hostile to their received American culture. Upper class whites, in contrast, are not face-to-face with the immigrant population since they can afford to move to relatively white enclaves where they are safely insulated from the downside of massive and often illegal immigration.

For that matter, I’m not sure that ending restrictions on coal mining is somehow anti-science or anti-fact. Obviously we have new ways of burning coal that make it a better quality fuel - i.e. clean coal. I have to admit that all the scientific evidence shows that tariffs will make things worse for the white working class.

Nevertheless, this is an approach that Trump (along with Ross Perot) has believed in for many years. It was not, on his part, a sudden decision to embrace this policy. As a practical matter, many other counties also make similar efforts to protect their domestic employers. Usually, these are smaller countries where they are highly dependent on the success of local champions. It maybe that the U.S. is now in a similar position. Also, conventional wisdom may be too bleak about the actual implementation of tariffs. Potentially, these tariffs may not go into effect because Trump will us them or the threat of using them to encourage other countries to lower their tariffs and permit more U.S. companies to fairly compete in their markets.

Some, of course, will argue that Trump colluded with the Russians to bring about his victory. Truthfully, I just don’t buy this. I don’t think you can cause an electoral realignment simply by having the Russian government spend a relatively trivial amount of money on social media or by leaking the e-mails of Hillary’s campaign manager. An electoral realignment is based on real issues, and tough decisions about the direction of the nation. The leadership needed to cause an electoral realignment comes from the candidates themselves…not some foreign government. Trump was that kind of leader and he scored an amazing victory by historical standards.

Hot or Not: Williams College Names Average Rated Teacher as the New Assistant Dean of the Faculty

I just got this little bit of news from the famous Ephblog. It turns out that Williams College has given the job of assistant dean of the faculty to a 43 year-old single woman, from the department of Romance Language and Literatures, Katarzyna Pieprzak. What is shocking about her is that she receives a very low rating from the popular Rate My Professor website. She is a 3.9 in a school where the average rating is 4.02.

According to the four students who reviewed her teaching, her courses have a level of difficulty of 2.8. She is not, as I take it, hot. I suppose I take these ratings more seriously than most because I know that people are less likely to lie when they are making anonymous written comments and that more popular professors also tend to have a larger number of raters. Moreover, even a flawed rating system is useful as a comparative standard.

To see the contrast between her ranking and that of an above average faculty member it is useful to review the comments of a truly outstanding Williams College professor, Christian Thorne. He scores a perfect 5.0 with seven reviews. He is hot. His level of difficulty is a still modest 3.9. Check out what one of his students wrote about him:

Equally at home discussing Videodrone and Jane Austen, curious about every novel ever written (he should try Etched City next) a brilliant professor, a fellow punk rocker with an endless variety of interpretation and a devious skill of extracting the best out of everyone in the classroom.


Professor Pieprzak is, according to Rate My Professor at least, a below average faculty member. She is also a sign of how deeply the school is invested in promoting women to positions of leadership even though they lack the most basic requirements for successful service including outstanding teaching records, prior business experience, or a commitment to freedom of speech. Moreover, she displays what Williams College is looking for right now. She is the school's Director of Arabic Studies and a member of its Africana Studies department.

In this particular case, the new hire, Katarzyna Pieprzak, is an expert on the Middle East. Accordingly, I think her role is part of a larger virtue signaling effort in which young impressionable students are brainwashed into thinking it is safe to live around Muslims and that we should pay no attention to what Muslims actually believe or the fearful words and directions they receive from their dangerous religious texts.

I'm sure that the administration is confident that they will never find her teaching race realism on the side or discussing the extent to which converting Muslims to Christianity, confining them to their traditional shit hole countries, and fighting the rest of them to death is probably our last best hope for civilization in Europe.

Her research, as I understand it, is based on the apparent oddness that Morocco does not have much in the way of museums of art or antiquities. I'm still laughing at this. I don't think you need to spend more that five minutes in Morocco to realize the low priority that Muslims place on either art or historic antiquities. It is part of their religion to disregard them. For her to suggest that this weakness in Muslim culture is a side effect of imperialism, white racism, or anything other than the sheer cretinism of Muslim culture is a sign of the bias and madness which has infected our formerly prestigious liberal arts colleges.

I remember that when I taught at Williams College I was ranked among the top 10% of faculty members for my teaching skill. My doctoral dissertation was the best in the nation in my field. It was later published almost word for word without revisions. When I taught my last class I had about 50 students who were in tears, men and women, as I made my final remarks.

I doubt that the students of the below average Ms. Pieprzak will be shedding any tears as she moves on to her new administrative responsibilities.