Bad Professor: Schooling Derek Catsam of the University of Texas at Permian Basin

While making comments at Ephblog.com, I bumped into the hatred and foul language of Derek Charles Catsam. His most recent comments are particularly unhinged and provide evidence of a rather extraordinary level of anger and bitterness.

He is a tenured associate professor at the University of Texas at Permian Basin (UTPB). This is a school located in one of the most depressing and barren parts of the nation—west Texas. UTPB is low-ranked Tier Two school with a shameful six year graduation rate of 34%. According to public records, he earns about $64,000 a year and yet imagines himself to be something of an extraordinary scholar and a gifted teacher.

(In California, for comparison, the starting salary for a tenured professor with a Ph.D. at a community college begins at about $64,000 per year and then moves up to over $100,000 per year.)

I did a little research on this darling of the extreme left. The truth about Derek Catsam is quite different than what he likes to report about himself. For example, I found that the Rate My Professor website indicated that Derek Catsam was one of the lowest ranked professors at UTPB with an embarrassing 2.6 grade. Only two others score lower than him. Ironically, it turns out that Catsam's wife, Ana Martinez, teaches in the same history department as him and she scores a much higher grade of 3.3.
Thankfully, websites like Rate My Professor now provide undergraduates with an opportunity to get out the truth about bad professors like Derek Charles Catsam. Here’s a great comment from one of Dr. Catsam's own students which seems match my impression of him at Ephblog:

“Derrick is an egotistical, arrogant professor who looks like a dork. He was probably picked on growing up and is now taking out his anger and bitterness on his students. No one cares about the idiotic book you wrote Derrick so stop talking about it! Avoid this LAME teacher (he’s not worthy to be called a professor) at all costs if possible!”

Like any normal person, I judge academic performance as a scholar and as a teacher according to the quality of the institution that hires you. At UTPB, Rate My Professor shows Prof. Catsam is under-performing his peers by a large margin. He is literally the worst of the worst compared to other professors on his own campus. Here is a sample of what his students went out of their way to write about him:

“This guy knows his stuff and obviously loves Africa. He is not approachable though and never cared if his students succeed or not. During presentations he wasn’t even paying attention and then proceeded to give most of the class C’s on their work. It’s fine if a prof is hard, but they should be willing to help you succeed too and he is no help.”

“I agree with most of the other raters, he is an egomaniac.”

“Catsam is the epitome of the arrogant prof. He is more interested in telling life stories and supporting his stupid Red Sox book than actually teaching history. And, by the way, missing class so much b/c of A. Martinez or his trips is not cool for us who pay $ for class.”

Sadly, Derek Charles Catsam ranks at the very bottom of the Rate My Professor numbers at University of Texas of the Permian Basin. Out of 20 professors who are rated, he ranks in the bottom 15%.
http://www.ratemyprofessors.com/campusRatings.jsp?sid=4366
Clearly, the comments from his own students make him look like an egomaniac with an inferiority complex. If he taught at Williams College, Derek Catsam's Rate My Professor scores would place him in the bottom 7%. In the Williams history department, he would be its lowest ranked faculty member. Ideally, Derek Catsam should ask his wife for help and advice...maybe she could break the news to him gently, saying: "You're a bad professor."
John C. Drew, Ph.D. is an award-winning political scientist.
- February 27, 2016 12 comments:

Film Crew at Our House: Trevor Loudon and the Enemies Within


Trish and I were honored to receive a visit from Trevor Loudon and his film crew this morning. 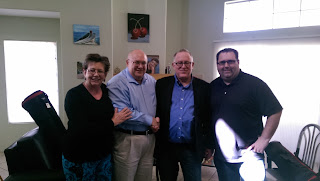 As you may know, Trevor Loudon is a New Zealand author, speaker and political activist who maintains a blog at TrevorLoudon.com. He initially got famous here in the U.S. when he was the first to show that there was a connection between Barack Obama and his mentor, U.S. Communist Party member Frank Marshall Davis.

Loudon is also the founder and editor of keywiki.org, a website which compiles dossiers on activists and political figures. Like me, he thinks it is important to get out the word that Communists are still among us – often in high positions of authority -- even though they have been discredited by the way in which the USSR lost the Cold War and Communist China has adopted market reforms. 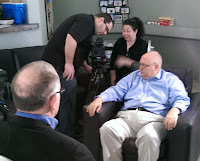 Loudon was mainly interested in how I became a young Communist, how I came to meet and debate young Barack Obama, and how my own views changed later on as I matured. It was a somewhat draining interview that brought back a lot of memories. It was also a remarkable moment to celebrate the way that conservatives have been able to use social media like Facebook, Twitter, YouTube and alternative websites to bypass the mainstream media and get out stories that are considered too hot or too controversial for the mainstream media...including the folks at Fox News.

No matter what, I feel proud to be part of a small band of brothers who have been willing to risk everything they have to get out the word about the radical roots of President Obama.

Email ThisBlogThis!Share to TwitterShare to FacebookShare to Pinterest
Labels: Barack Obama, Barack Obama and the Enemies Within, Documentary, John Drew, New Zeal Blog, Socialists and Progressives in the U.S. Congress, The Enemies Within: Communists, Trevor Loudon

As Bad as it Gets: Feeling Blue About Amber Property Management in Mission Viejo, CA 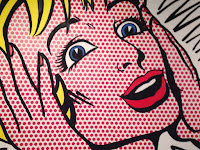 As I understand it, one of their most dissatisfied customers is planning a lawsuit against them. If you would like to be part of that effort, they are encouraging you to contact them at vusteven.ghr@gmail.com.

Most recently, they failed to send the required Call for Candidates statement to approximately 10% of our community members.

To make matters worse, Pam Morris, 73, Amber's CEO, made a decision to send out a letter notifying our members that the annual meeting had been cancelled and that a new election was being scheduled. To my utter shock, she did this prior to obtaining the lawful approval of the board of directors.
Then, Amber Property Management scheduled an "emergency meeting" for the Del Prado the board of directors. They notified me that I was supposed to participate in a telephone conference, but they sent me the wrong telephone number and the wrong entry code.
I am so frustrated with Amber Property Management that I have filed two separate complaints against them with the California Associations Institute (CAI) for failing to follow proper ethical standards.


Below, I have included a copy of the two complaints against Amber Property Management that I recently submitted to the CAI for review. I'll keep you informed about what is going on. If you live in an HOA, you might find it useful to review these complaints so you can be on-guard against similar problems in the future.

Moreover, Ms. Morris violated Section 8 for the CAI Professional Code of Ethics by failing to “Insure that homeowners receive timely notice as required by state statutes or legal documents and protect their right of appeal.”

Without seeking the approval of the full board of directors in either a special meeting or an emergency meeting, Ms. Morris issued a statement announcing the cancellation of the March 8, 2016 Annual Meeting. This statement was postmarked February 16, 2016. I have attached a copy of this document and the envelope it came in. I allege that Ms. Morris violated Section 3 of the CAI Professional Code of Ethics which says she must: “Act in the best interests of the client; refrain from making inaccurate or misleading representations or statements; not knowingly misrepresent facts to benefit the Manager.” Specifically, she violated our Del Prado HOA bylaws which do not allow for the cancellation of the annual meeting at all. In addition, she violated our Del Prado HOA bylaws by sending a 2nd Call for Candidates without obtaining a decision to authorize that mailing from the full Board of Directors of Del Prado HOA.

In summary, I am alleging that Pam Morris gravely her violated the CAI Professional Code of Ethics by 1) failing to properly notify members and provide them with the documents needed to run for a seat on the Board of Directors, 2) announcing the cancellation of the annual meeting in violation of Del Prado HOA bylaws and 3) cancelling the annual meeting prior to obtaining authority from the Board of Directors to take this unprecedented action.

Despite repeated warnings, Ms. Morris has disregarded these stipulations by failing to include in our violation letters the “the article and section of the Declaration of Restrictions being violated.” There is some sloppiness in her work since some letters, in the very same batch, will be done correctly while other letters will be done incorrectly.

By failing to follow our Del Prado HOA policies, Ms. Morris has  violated Section 5 of the CAI Professional Code of Ethics by failing to “...exercise due care and perform planning and supervision as specified in the written management agreement, job description or duly adopted Board policies.”

In addition, she has also violated Section 8 for the CAI Professional Code of Ethics by failing to “Insure that homeowners receive timely notice as required by state statutes or legal documents and protect their right of appeal.”

In summary, I am alleging that Pam Morris of Amber Property Management and the CAI certified staff members working for her violated the CAI Code of Ethics by routinely failing to issue violation letters that included the article and section of the Declaration of Restrictions being violated as required by our legal documents. This complaint of an ethics violation has been filed because of the persistence of this unlawful behavior in the face of repeated reminders and warnings from me.