This is Not a Cherry: Painting on the Night George Zimmerman Was Declared Not Guilty

I'm struck and saddened by how out of touch with reality the left has become in our country. The absurd idea that Zimmerman hunted down Trayvon Martin is the latest urban myth that the low-information voter seems to be buying into. I find this quite creepy. 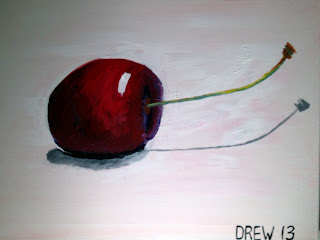 The inability of the truth to impact the consciousness of so many people seems to be causing grave damage to our nation. We live in a world were people honestly believe that Obama was never a Marxist socialist, that our current economic woes are due to the Bush administration, or that Trayvon Martin did nothing to make his killing legally okay.

Somehow, eventually, people will wake up to the reality of their senses and the guidance of their common sense. In the meantime, I think it is up to those of us in the Tea Party Movement to speak the truth and remind others that the truth is real and it has long-term consequences. As they say, "This is not a cherry."

John C. Drew, Ph.D. is an award-winning political scientist. He applies his skills as a grant writing consultant in the Southern Calfornia area. His website is at the following link: http://drdrewguaranteedgrants.com/about-us/

As you may know, a career politician, State Senator Mimi Walters has announced that she is a candidate for the Congressional seat currently held by Rep. John Campbell. Rep. Campbell, as far as I can tell, was forced into retirement by those of us in the district disgusted by his RINO status and his relative disinterest in actually meeting with and talking to his constituents. In the picture above, you can see Mimi Walters celebrating the birthday of her chief-of-staff - the fellow who is bending over her in the picture. Below, Walters declines to answer a question about her residency in a video published by the Sacramento Bee on March 28, 2014.

Walters ran poorly in her recent race for state Treasurer. She is termed out of her current office. Her family business is in trouble with the state of California and with its former employees who now assert she has not been paying them on-time for their work. Sadly, she still received endorsements from Representatives Ed Royce, Supervisors Pat Bates, Shawn Nelson and Janet Nguyen and Assemblywoman Diane Harkey. I guess not paying your employees and living largely off money you earn from the State of California is not a big sin in some circles. (The Harkey family also has questionable business practices.)
Personally, I have found Walters to be one of Orange County’s least friendly public servants. I guess, in this sense, she will be a representative much along the lines established by John CampbellMimi possesses a B.A. degree from UCLA. She has a minor background in business, finance and local government. Her professional career only lasted for seven years when she served as an investment executive. Her credentials seem less than spectacular and she strikes me as something of an affirmative action candidate.

Ironically, she has won all three awards that are issued by the Orange County Republican Party, being named Local Elected Official of the Year in 1997, Volunteer of the Year in 1998 and Legislator of the Year in 2005. Of course, this is the same group that fought hard to promote Sheriff Carona despite the fact that he was cheating on his wife or supported Rep. Campbell despite his vote for TARP and his bizarre support for gays in the military. Most recently, Walters was in the news for claiming that she lived in Irvine in a one bedroom apartment that lacks a dishwasher. As a recent lawsuit noted:

Personally, I find this sort of lying to be deeply offensive. It is not the sort of behavior that reflects well on Republicans in our community. Sadly, it looks to me like telling the truth, the whole truth and nothing but the truth is not a Walters family value.

John C. Drew, Ph.D. is an award-winning political scientist. He applies his skills as a grant writing consultant in the Southern Calfornia area. His website is at the following link: http://drdrewguaranteedgrants.com/about-us/
- July 02, 2013 1 comment: