﻿
I thought it would be helpful to list my take on the California state-wide ballot measures. These were very confusing and took time to sort through. In general, I am proceeding along the lines that less is more and that it is probably a good idea to have fewer new laws than more new laws. (I am borrowing a lot of this information from the Orange County Register, even though I am saying "No" more frequently than they suggest...)

Tax Hike: It is a silly idea to raise taxes right now. It is a better idea to cut the pay of government employees and trim back our bloated California government.

Union Funds: This is the most important measure on the ballot and the only one I feel really strongly about voting yes on. It would prohibit union contributions to state and local candidates. It would also impose a ban on automatic paycheck deductions for political purposes by unions. Public employee unions are killing us and this is one of the few ways for us to fight back.

Insurance: I just do not understand how this helps consumers and I think it is probably better for the legislature to figure this one out.

Death Penalty: If you vote yes on this one, then California would no longer have a death penalty. I think we are all better off when these bad guys are no longer alive. At the very least, it keeps liberals from the future from freeing these people to hurt still more innocent victims.

Sex Trafficking: Looks like it just adds more complexity to the existing law. As I said, I am in the mood of seeing government do less and less.

Three Strikes Law: This would weaken the state's 18 year-old three strikes law. Frankly, I do not think there should be any crime at all. I do not understand how it helps us to allow these folks to roam free, terrorizing their law abiding neighbors. If you cannot avoid harming other people - in big or minor ways - then I do not want you on the streets.

Food Labeling: This looks like an issue that would be better handled by the marketplace. If you do not want to eat genetically modified food, then I think there are providers out there to meet your needs.

Tax Hike: This would eliminate the option for companies with headquarters out of state to choose the least-burden some formula for paying their California taxes. Just looks like more anti-business hate from the state.

Redistricting: I just do not see any major advantages coming out of changing the existing rules or districts. This looks like more unnecessary instability. A "No" vote would reject the new state senate districts drawn by the Citizens Redistricting Committee.

My simple advice is to only vote YES on 32 and pretty much ignore everything else.

John C. Drew, Ph.D. is an award-winning political scientist. He applies his skills as a grant writing consultant in the Southern Calfornia area. His website is at the following link: http://drdrewguaranteedgrants.com/about-us/
- October 14, 2012 No comments:

Trust Me, I’m from the Past


I watched Mitt Romney dominate the presidential debate immediately after viewing the time travel movie, Looper. If I had access to time travel, I would use it now to leverage my role as the only person on Earth willing to testify that young Obama was a genuine Marxist socialist in 1980. Energized by Romney’s performance, I am asking myself what can I do - right now - to forestall a real life enactment of the future imagined by Rian Johnson, writer and director of Looper. After all, Johnson’s vision looked so bleak that my wife’s reaction was to say: “Looks like Obama won.”

If I had the advantage of time travel, I would go full on Bruce Willis right now. I would go to 2008 and introduce myself to the television studios of Fox News, CNN and MSNBC.

I believe public knowledge of my face-to-face confrontation with young Obama’s ideological extremism in 1980 would have helped prevent Obama’s election in 2008. My account of Obama’s anticipation of a Communist revolution would have alerted voters to the reality that Obama was not a bipartisan politician, but rather a long-standing advocate of class warfare and other hateful ideas promoted earlier by the likes of Frank Marshall Davis. My story would have highlighted the real Obama, the Obama who asserted, as he did at a at a Martin Luther King Day speech at the University of Chicago in 2002, “that rich people are all for non-violence” simply because “they want to make sure people don’t take their stuff.” 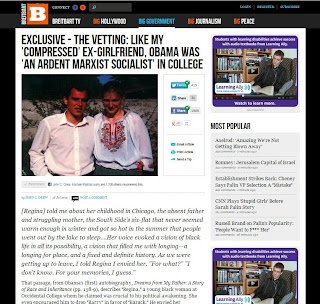 I would share with the people of 2008 that Obama is stuck in the ideological past. He is a partisan extremist who cannot imagine doing what Clinton did to save the American economy or uplift the black urban underclass. Obama is the sort of ideological purist who would never pivot to the middle. I would tell the people of 2008 that Obama’s lack of bipartisan skill would blow a perfectly good deal with House Speaker John Boehner for reducing the federal deficit. Instead of cutting the deficit in half, I would tell them Obama will increase the deficit more than all the presidents before him. I would alert the people of 2008 to the fact that Obama would be eager to weaken the previously rock solid work requirements of welfare reform. I would repeat a key line from the movie: “Trust me, I’m from the future.”

Lacking the option of time travel, I still think my story helps explain why it was fairly easy for Mitt Romney to defeat Barack Obama in a formal debate. I can report that young Obama was no genius. I saw signs of that young Obama last week when Romney pointed out that in 25 years in business he had never seen a special tax break for corporations who send jobs overseas. Obama - without his teleprompter and entourage of liberal sycophants – is apparently incapable of reacting forcefully to a verbal punch from a true business and political heavyweight.

Temperamentally, I remember young Obama treated my more accurate understanding of world history with an abrupt, even demagogic hostility. I distinctly remember young Obama’s dismissive, arrogant attitude even as I was presenting him with compelling evidence that Marxist theory was dead wrong at predicting the path of European social and economic events. I remember schooling young Obama so thoroughly in just one evening myself that he left my girlfriend’s house agreeing with my more moderate neo-Marxist perspective.

Culturally, I can report that when I debated young Obama in 1980 he talked like a white guy. I did not see a trace of the phony accent that highlighted Obama’s shocking comments regarding the redistribution of the wealth to a conference of black ministers at Hampton University in Virginia in 2007. In fact, the young Obama I met in 1980 talked like a wealthy, privileged white guy. It never occurred to me to think of young Obama as African-American. After all, the African-American students at Occidental College were largely uninvolved in radical campus politics. They were more likely to be active in the Gospel choir than the Democrat Socialist Alliance. Instead, young Obama seemed more like a foreign prince visiting in the United States.

While I cannot enjoy the benefits of time travel, I do live within six hours of Las Vegas, NV. I suspect my Bruce Willis moment will come when I share my story of debating young Marxist Obama with swing voters in the nearby Silver State. My wife and I have signed up to spend a weekend in Las Vegas walking precincts for the Romney/Ryan campaign. We will enjoy some meals, hotel accommodations, a night on the town and an opportunity to impact this historic election. I have my tagline ready: “Trust me, I’m from the past.”

John C. Drew, Ph.D. is an award-winning political scientist. He applies his skills as a grant writing consultant in the Southern Calfornia area. His website is at the following link: http://drdrewguaranteedgrants.com/about-us/
- October 12, 2012 1 comment:

The New Yorker blog features new photos that verify my take on what our 44th president acted and looked like as a sophomore at Occidental College. Readers will note the real Obama, the young revolutionary extremist with a soft spot for Islam, that I got to know as a participant in Occidental’s radical student politics.
http://www.newyorker.com/online/blogs/newsdesk/2012/10/barack-obama-at-occidental-college-photographs.html#

Curiously, the photos show Obama wearing a band on his left ring finger that WND alleges to read “there is no God but Allah.”

The photo I find to be most historically significant is the one that shows details from of the anti-apartheid rally of February 18, 1981, the rally that debuted Obama’s famous first skit in Obama’s Dreams from My Father. In contrast to Obama’s story, the banner above the event proclaims the somewhat more complex cause of “Affirmative Action & Divestiture NOW.” The photo features many of the real life figures who would become composite characters in Obama’s autobiography. These include my white ex-girlfriend, Caroline Boss, the radical student leader who improbably lent her grandmother’s name - and much of her scintillating personality - to the big-boned, black “Regina” character.

For the record, I view these photos from the perspective of an accident victim looking at a long ago car wreck. Caroline and I had parted ways just weeks before this rally. As I recall, the split was painful enough to cause us to temporarily adopt the roles of imaginary divorce lawyers, lawyers who combed through our conflicting feelings and amicably laid out the details of what became our eventual, imperfect separation.

“Decades later,” Margot Mifflin writes in response to these photos, “Obama would spur a new generation of students into political action, forging a connection between sixties radicals and media-savvy millennials.” Mifflin, of course, is only telling part of the story. She leaves out the part where at least one of Obama’s friends was not so pleased by the impact of affirmative action and never quite forgot what it was like to sacrifice everything he had for scholarly achievement only to learn, at the end of the process: “Sorry, you’re white.”