One of Trump's Twitter followers, @amesmoreno put together a new meme that pretty much captures the present political moment for me. She offered to do one for me and I took her up on it. Here is the result below: 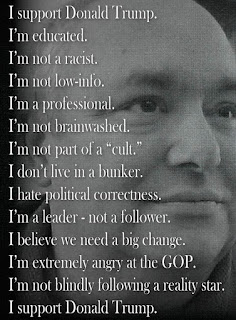 There seem to be a lot of pundits knocking both Trump and his supporters as if we are not smart enough to sign on the current political system's corruption and lack of interest in the needs of the great middle class. I don't usually use my own face on my political work, but I'll make an exception for this effort. By the way, @amesmoreno has offered to set this up for anyone who shares their photo with her on Twitter. Who knows, these may end up in the Trump presidential library some day.

It looks like about 20 of us have been graced by this gift of marketing imagery. Here are some other samples. 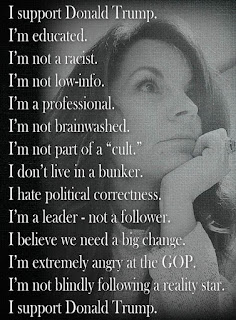 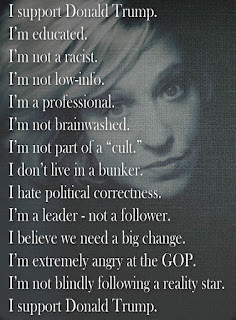 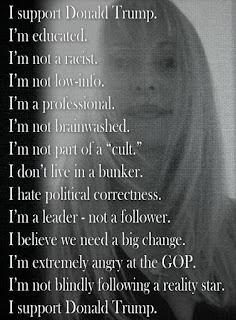 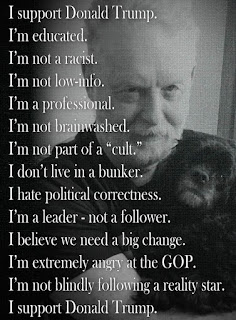 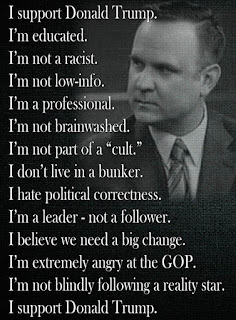 Shape of the Future: No More Population Pyramid

As a student of child labor and child welfare programs, I have long thought that most of us underestimate the dramatic changes associated with ending child labor. Since most of us in the U.S. grew up in a country that effectively banned child labor, we think it is normal that children go to school, play, and do their homework. It is tough to realize that this now ordinary pattern really wasn't the rule in the U.S. until the Progressive Era. In poor regions of the world like Africa and South America, this pattern has still not completely taken hold.

One of the most interesting articles that help illustrate the breathtaking changes caused by child labor laws crossed my desk this week. John Parker, the environmental editor of one of my favorite magazines, The Economist, wrote  "The World Reshaped: The End of the Population Pyramid," back in November 2014. The most interesting part of this article, for me, is how the famous population pyramid is predicted to change over the next half century. See, below:

In Parker's view, the declining fertility rate is largely responsible for the changes we see in the population pyramid between 1970 and 2015. The column shape of the pyramid that scholars anticipate for 2060 is largely the result of improved longevity in his view.

I have been fascinated with this chart all week. I think that Parker is misinterpreting this information because, like most social scientists, he does not appreciate the impact of child labor laws on fertility, increased intellectual capital, and wealth accumulation. In the first place, child labor laws are unlikely to change and thus we will never see increases in fertility rates again. (Unless, of course, the Muslims take over completely and drag us into their dysfunctional world view.) In fact, I would predict that the fertility rate will eventually decrease everywhere as child labor laws are enacted and fully enforced. If parents cannot benefit from their children's labor, then we are taking away what has traditionally been one of the most important reasons to have children in the first place.

I do, of course, anticipate that improvements in medicine will result in longer life spans. It makes sense to me that the column will continue to get higher for that reason. Nevertheless, I also expect that the base of the column -- the number of children in the world -- will continue to decrease until major (even dramatic) efforts are made to encourage increased fertility rates.

I am still thinking through the implications of this new column shaped population pyramid. At the very least, it give us a more accurate image of what the world will look like for many generations to come. Those of us alive today will be among the first to think through the predictable trials and tribulations of this brave new world. For more of my thoughts on child labor and child welfare please see my Pathway to Prosperity blog site.

I noticed the activists behind the Black Liberation Collective (BLC) have issued a set of three national-level demands, demands they want our various colleges and universities to comply with in the near future. Given the publicity associated with these demands, I thought it might be a good idea for those of us who would be harmed by these extraordinary demands to provide our response and our own set of counter demands.

Reviewing my own counter demands, I think it is fair to say that I believe we have a right to demand more from the black community to address its own grievous failings before we bend over backwards to meet the protester's demands. In particular, I think we need to demand immediate changes in dysfunctional black culture, including its fascination with the so-called Knockout Game as described in the YouTube video below.

Reviewing the actual demands of the BLC, I see they have included the wish list generated by the Oxy United protesters at Occidental College. I will ignore the Occidental College specific demands since I have already dealt with them in an earlier post. Instead, I will list the national-level demands below, provide my own response, along with counter demand that should provoke an opportunity for self-reflection and legitimate debate.

1) WE DEMAND at the minimum, Black students and Black faculty to be reflected by the national percentage of Black folk in the country.

As a political scientist, I have thought about this issue for a long time and frankly it never made sense to me that black students or black faculty should be represented according to the national percentage of black folk in the country. Ultimately, this demand is unrealistic and unfair for everyone else because it fails to take into account the ways in which black under performance in the academic world is caused by dysfunctional black culture. For example, I think that it is more reasonable that we should expect the proportion of black students and black faculty to represent the percentage of black folks who grow up in strong, stable, two-parent families. As long as the black community accepts dysfunctional lifestyles, it is unrealistic to expect black achievement to come any where near to the levels seen in Asian or white communities.

Reasonable Counter Demand #1: Black folk must work harder and achieve the same standards set for the rest of us. It is not that hard to obey the police, abstain from drugs/alcohol, and avoid having children while you are still a teen or single. It is not too much to expect greater personal responsibility from black folk including a strong commitment to marriage, parenting and family. In the meantime, we should not punish the children of people who are living saner and healthier lives.

2) WE DEMAND free tuition for Black and indigenous students.

This demand seems like a total waste of time and money to me. After all, it is easy to get a free education on the Internet. In my experience, you can pick up just about any skill you want by watching YouTube videos. Moreover, we have free public libraries which provide even the poorest among us with virtually unlimited resources including free access to computers. I don't see the big deal about making education free. If you want to learn about American Government, I will give you a free syllabus and my own lecture notes. Since black and indigenous students already have access to free education, I am not in the mood to give of my money fund some leftist professor to give a way a wasteful, more expensive version of education.

3) WE DEMAND a divestment from prisons and an investment in communities.

All these prisons are saving us money by keeping dangerous, unsafe people off the streets. It makes more sense to me to dramatically increase the penalties for crime. If the penalties are high enough, then we would see less crime -- as is the case in places like Singapore.

In an ideal world, those who cause the most crime should be required to pay the most to suppress it. In particular, we should make life miserable for unwed, single mothers. We should make an example of them so that no one would even consider becoming a single mother in the first place. It is not that hard to use birth control or to abstain from sex until you can handle the responsibilities of being a parent. We need to ask black folk to invest in their own communities by not making the birth control mistakes that cause poverty, criminal behavior, or child abuse and neglect. As the victims of the Knockout Game will tell you, it is no fun to be the victim of black criminals who lack empathy for the people they harm.

When the Knockout Game ceases to be cool in black neighborhoods, then maybe I will be willing to think about the rest of the BLC's demands with a little more sympathy.