I’m still reading through David J. Garrow’s new presidential biography, Rising Star: The Making of Barack Obama. Already, however, I can report that he cited a number – but not all – of my American Thinker articles. Garrow recommends reading them in chronological order.
Meeting Young Obama
Even Republicans Rejected Info About Obama’s Past
My White Girlfriend Inspired Obama’s Big, Dark Regina in Dreams from My Father
White Like Me: Thoughts on Young Obama’s Prom Photos
The worst that he can say about me is to suggest that by reports are perhaps similar to those of other potentially reliable ex-Communists. He indicates, correctly, that I was a Tea Party activist. All things considered, it looks like I got off light -- at least compared to Garrow's rather harsh treatment of Barack Obama. Garrow goes out of his way to indicate that Obama married Michelle, in large measure, because he needed a black wife in order to have a smooth political career in Chicago. It turns out that Obama was sleeping with both Michelle and an ex-girlfriend during his second year at Harvard Law School.

Garrow documents my previous role as an academic. For example, he reports that I completed my Ph.D. and taught at Williams College. I have to think the late presidential history James MacGregor Burns who was a colleague of mine at Williams College would be proud of me today. At least prouder of me today than Michelle Obama is of Barack Obama.

Unsafe at Any Speed: Should I Go to Williams College? 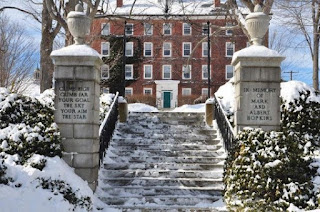 Waiting for Garrow: New Obama Biography Due This Week

Those of us who want to reduce President Obama’s future influence in American politics are looking forward to the release of David J. Garrow’s new 1,400 page opus, Rising Star: The Making of Barack Obama. Although Professor Garrow is a Bernie Sanders donor, he has a reputation as an honest, straightforward historian. This reputation is the result of his balanced and even somewhat damaging Pulitzer Prize winning book on Martin Luther King, Bearing the Cross (1986).

While some journalists have already received preliminary copies of Rising Star, most of us will have to wait a little longer since the book will be released on May 9, 2017. As for me, however, I have been waiting to read Garrow’s book since December 2011.


I was one of the 1,000 people who Garrow interviewed, a number he repeatedly refers to when he wants to present his book as the new, gold standard for Obama biographies. Garrow’s book is competing for this honor against David Remnick’s The Bridge (2010) and David Maraniss’s Barack Obama: The Story (2012). Neither Remnick or Maraniss interviewed me even though they interviewed almost all of the students I knew at Occidental College between 1979-1981.

I have always found this odd since my face-to-face observations of young Obama’s radical ideology were reported -- prior to the publication of either book -- by Ronald Kessler in a NEWSMAX article that appeared in early February 2010. See, http://www.newsmax.com/RonaldKessler/obama-college-marxism-occidental/2010/02/08/id/349329/

Later, my complete report of Obama’s commitment to a leadership role in a coming, inevitable Communist revolution appeared in an article I wrote called “Meeting Young Obama” that was published in American Thinker in February 2011. See, http://www.americanthinker.com/articles/2011/02/meeting_young_obama.html

Maraniss’s failure to interview me seems particularly misguided since my first impression of young Obama has been accessed and cited by so many other authors. So far, it has appeared in Glenn Beck’s “Liars” (2016), Jack Cashill’s “Deconstructing Obama” (2011), Stanley Kurtz’s “Radical-In-Chief” (2010), Paul Kengor’s “Dupes” (2010) and “The Communist” (2012), and Michael Savages’ “Trickle Up Poverty” (2010).

Accordingly, I was suspicious when I first heard from Garrow by e-mail because my story had been so neglected by previous mainstream historians. In an abundance of caution, I checked out his YouTube videos and then asked him to give me a call so I could be sure I was talking to the real Pulitzer Prize historian and not some deranged Occupy Wall Street protester. Over the phone, we agreed to meet at my home in Laguna Niguel.

As a political scientist, I have spoken with presidential historians before, including the late James MacGregor Burns who was a colleague at Williams College. However, I had never been interviewed by one.

I was surprisingly nervous.  As Garrow sat in my living room, I almost dumped a full glass of ice tea on him.  It was also surprisingly unpleasant to remember my youthful days as a recent Occidental College graduate who was dating a girl, Caroline Boss, who was still a senior at Occidental and who was so close to young Obama that Maraniss claims she was one of the most significant composite characters included in Obama’s Dreams from My Father (1995).  I prepared for the interview by sorting through old photographs and rereading about 30 cards and letters from that era of my life.

As it turned out, Garrow was something of a gossip. He entertained me with news regarding the fate of my old friends and acquaintances:  who got married to who, who succeeded in life and who failed. I also found out Garrow plays an awkward role in informing people of the deaths of those who used to be in their social circles.  In my case, Garrow revealed one of the Occidental College radical leaders I knew best, Gary Chapman, 58, had died of a heart attack the previous December.

During the recorded interview, my aim was to stress my credibility and to get as much of my story as I could into the historical record. I shared with him evidence of my relationship with Boss including some photos and a romantic card she sent me.

Over time, it became clear that while Garrow was familiar with my American Thinker piece on young Obama, he was much more interested in tracking down the community which surrounded Obama at Occidental and by all accounts continued to support and stay in touch with him right up to his election as president.

Sensing his true interests, I surprised him by bringing out an old, tattered, green address book which included Boss’s phone numbers and addresses in both the U.S. and Europe. He seemed positively giddy about it.  He wrote down nothing and instead he read out loud from my address book into his recorder.

I did speak to him off-the-record too, but only about sexual matters, the sort of unseemly things which would be embarrassing to air but still would help him understand the intimate social connections of Obama’s Occidental College friends. He indicated to me that his next stop would be Washington state where he would interview Caroline and her husband, Tom, who had also been a student at Occidental College.

After we were done, I remember Garrow was gracious enough to pose with me for a photo. It turns out his wife, Darleen, had been waiting for us in a car while the interview took place. As she took the picture, I praised her husband for his status as a Pulitzer Prize winning biographer. She seemed a little jaded by my compliment and less effusive than me in praising his worthwhile accomplishments.

At this point, I am not at all confident I had much impact on Garrow’s book.

I listened to a radio interview he gave to Jamie Weinstein and he flatly dismissed any suggestion that young Obama was gay, Marxist, Muslim or a beneficiary of the writing and editing skills of Bill Ayers, an unrepentant domestic terrorist. Using the broadest possible definitions, in contrast, I see the young Obama as all four. I am waiting to see if the mainstream media will use Garrow’s book to short-circuit future attempts to create an honest account of Obama life, an account which should rightfully end his political influence.

Note: This article was originally published in American Thinker on May 8, 2017.