Obama had far less of a honeymoon period for his Presidency than might have been expected given his large majorities and high popularity. The reason for this, in my view, was his lack of skill. One of the things that people forget is that politics is a skill, just like anything else in life. It takes practice and effort. Obama, due to his inexperience, is now facing some key challenges that crimp his political power.

For example, his lack of experience in legislating cost him early when his efforts failed so publicly in the area of bipartisanship. The explanation that makes the most sense to me is that he trusted the House leadership to draft a fair stimulus package, but they took advantage of his inexperience and harmed his image in the process. One consequence of this “bone-headed” mistake was a startling 100% united opposition to his efforts among Republicans and fractures in his own party as moderate Blue Dog Democrats split off from Obama’s coalition.

His inexperience also harmed him through a string of terrible high-level appointments. The worst one, in my view, was his effort to jam through Sen. Daschle, a fellow who would have had great power in Obama’s administration because of all the former Sen. Daschle staff on hand. I think this was a major victory for conservatives, because Daschle would have been a powerful player in pushing through socialized healthcare.

Visually, the great symbol of Obama’s inexperience was his surprising dependence on the use of teleprompter technology. This dependence cost him both credibility and respect. Even worse, he was ridiculed for his use of the teleprompter at precisely the time in his Presidency when he needed an illusion of smarts, mastery and professionalism.

I guess, for full disclosure, I should point out that I got in on the teleprompter feeding frenzy myself with this little video.

Unfortunately for Obama, the American people had an opportunity to see the “real” Barack Obama quite early in his Presidency when Obama went on the Jay Leno show. In a brief unscripted moment, Obama revealed that - without the help of the teleprompter - he’s the sort of fellow who would make fun of Special Olympics kids.

Obama, for his part, apparently knew the teleprompter was signaling his inexperience and inability to speak eloquently off-the-cuff. However, he made matters worse when he substituted a big screen television for the teleprompter at his second press conference.

Given Obama’s life-long commitment to Marxist socialist thought, I’m breathing a sigh of relief that his honeymoon period has been complicated by his own missteps. His administration would be a lot more frightening if – like FDR or LBJ - he was experienced enough to know what he’s doing. Neither of those political geniuses would have squandered their first 100 days.

Thoughts on the Florida Congresswoman Who Hid Her Cancer Surgeries 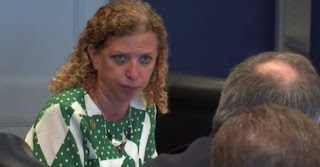 Back in March 2009, Rep. Debbie Wasserman Schultz, Democrat of Florida, revealed that for the last year, she had battled breast cancer. What surprised me, as a student of politics, was her ability to keep this information secret. Apparently, Rep. Wasserman had seven major surgeries, including a double mastectomy and removal of her ovaries with out this information leaking out the the general public. Only in March of this year did she reveal her decisions to have such cancer-prone areas removed because of a genetic predisposition.

Rep. Wasserman, in her early 40s, said she didn’t release the news for a few reasons. “I really wanted to make sure that I could protect my children; they were 8 and 4.”

This story caught my attention because I know charismatic leaders have a powerful incentive to hide the bad news about their health. Reagan, for example, was quite hurt after he took a bullet…but he looked all cheerful and robust peaking out of his hospital window.

As a political scientist, I think I'm sort of offended by Wasserman’s suggestion that she kept her personal health a secret to protect her children.

I think this is largely a lie spoken to deceive the gullible. I’ve seen her on television and she’s pretty cold and ruthless with others. She’s very focused on her talking points. She also strikes me as an extremely angry person. Besides, at those ages, I don’t think the kids would really understand.

Based on what I know of other political leaders, I think it is safe to say that she kept her health problems a secret for primarily political reasons. Quite simply, news about her poor health would harm her fundraising and campaign activities. Some of her supporters, I imagine, would even suggest that she quit politics and devote herself to private matters. Given the severity of her health issues, I’m sure other healthier and younger candidates in her area would be a better investment for the time and resources of her political party. I know this may sound insenitive to those new to politics, but I’m certain that this is the calculation she was making herself…

The larger issue, for me, is media collusion with this secret-keeping. In the case of Sen. John Edwards, I think the media knew about his affair (his wife certainly did) but they kept it quiet because they did not want to interfere with a Democrat running for President…or to interfere with the impact of Edwards’ endorsement of Obama.

The main point I would like to make…for the journalists who read this…is that not disclosing a politician’s health strengthens their political power. Keeping health issues a secret is not a value-neutral decision…it directly impacts the leader’s influence and longevity in politics. It is a secret that impacts the sub-leaders competing for power, sub-leaders who are always part of the charismatic leader’s decision-making.

At any rate, I’m here because I feel I have a temporary mission to share what I know about politics and economics…at a time when I believe our nation is in grave danger. The more people understand about how charismatic leaders create winning images for themselves...the safer we will be.
- April 09, 2009 5 comments: