A Quick Look at a Hot Topic: Foundations that Gave to ACORN in 2008

I thought it might be interesting to see what foundations have been giving money to ACORN in 2008. Here's a chart which shows the name of the foundation, the ACORN recipient, the date of the grant, and the amount of the grant. It seems to me that we ought to be asking some of these foundations what, if any, changes they will be making in response to the videos created by James O'Keefe and Hannah Giles. Just click to enlarge the image below: 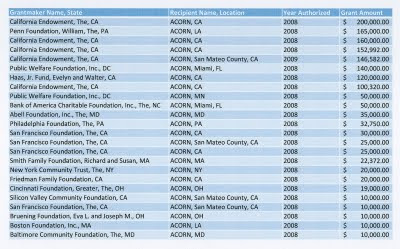 As I was loading up this data I listened again to the sting operation they conducted at the ACORN office in Baltimore, MD. I had forgotten that ACORN employees signed off on his plan to use prostitution to raise money for his congressional campaign.

Good Morning America: Things Need to Change If They Are Going to Stay the Same

I thought it was a good idea to simplify my life and start posting under my real name. Part of the reason is that the world seems to be waking up to the reality of the Obama administration, and President Obama's own commitment to Marxist socialist thought.

Under these circumstances, it does not make sense to continue anything that makes my communications more difficult than they need to be. For a while, of course, I was sort of proud to be part of an American tradition of anonymous posting which dates back to the days of the American revolution. Accordingly, I'm a little sad to put the anonimity of Augustine 25 behind me. It's the end of a very short era. :)

I'm reminded of the story of how a top banker met with Napoleon and was pleased when he learned that Napoleon did not want to take away any of the deposed King's deposits. Napoleon made a clear distinction between business and politics. When the King returned to power, he put no pressure on the banker to confiscate Napoleon's wealth. In this spirit, I'll find fresh new ways to keep business separate from politics.

For those who do not know me, here's my official bio:

John C. Drew, Ph.D. is known in the Southern California area as an award-winning author, teacher, and speaker. Combining his market research skills with fundraising expertise, John has helped turn around some of the Southland’s most famous charities including the Museum of Latin American Art, the Friends of the Cerritos Center for the Performing Arts, Opera Pacific, the Los Angeles Society for the Prevention of Cruelty to Animals and Walking Shield American Indian Society. John has taught at Cornell University, Hope International University, University of Oregon, and Williams College in Massachusetts. He and his wife Patricia have lived in Laguna Niguel, California since 2003.
- September 18, 2009 1 comment:

As pundits like Maureen Dowd speculate about whether or not opposition to Obama's health care reform plan is motivated by racism, I find myself much more concerned about a scene on television where a black adult harms a young white person. Specifically, I'm thinking about how Kayne West treated the 19 year-old Taylor Swift when she received a Video Music Award (VMA). 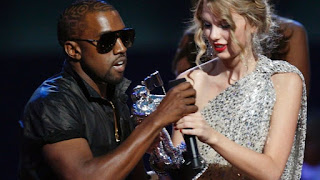 As far as I'm concerned, Kayne West emotionally abused and attacked that poor girl by spoiling a once-in-a-lifetime moment of victory that was supposed to be hers alone. In West's twisted ideological point of view...his behavior was justified by his own "hurt" according to his statement later of the Jay Leno Show.

Sadly, the ideology of the Democrat party opens the door to the dehumanization and mistreatment of young white people. The assertion that honest criticism of Obama is racist simply feeds into the dysfunctional ideology which facilitates attacks on the most vulnerable members of the white population - weak, defenseless young people - as a way of articulating the larger "hurt" caused by racist social structures.

Part of the reason for the mistreatment of young people like Taylor Swift is that liberal ideology teaches us that all white people are racists and that our social system is stacked in favor of white children. Folks like Kanye West are not properly labeled as "abusers" simply because their actions are seen with in the revolutionary context of "hurt" blacks fighting systemic white oppression.

I define racism as hatred of another race. By this definition, black people can be considered racists when they fall into this behavior. Sadly, racism - by my definition - appears to be quite active in the news today.

I also spent time watching the video of the young white teen being attacked by four black teens on YouTube earlier this morning. I've been watching a little BET too. I also reviewed the most recent FBI crime statistics to verify that black on white crime is far higher than white on black crime. In my view, the vilification of the white community in liberal ideology is a major contributing factor to black on white crime...and to the tolerance of affirmative action programs - including programs similar to those which are now illegal in CA.

One of the patterns I'm noticing is an alarming tendency for leaders in the black community to minimize the pain and suffering of the victims of black on black and black on white crime...and to treat black criminal behavior as a normal and acceptable rite of passage for a young black man. There is also virtually no appreciation for the damage that affirmative action does to young white people.

The problem with this cultural meme is that it promotes a profound lack of empathy for other people, the sort of lack of empathy that Kanye West showed toward 19-year-old Taylor Swift.

I think that one of the keys for creating a better and more prosperous world is for those of us who have empathy for others to speak out and fight harder against the people who set poor examples for America's youth. Paying more attention to the victims of juvenile crime might be an important place to start. It is also important to define racism in a way that makes sense and calls attention to the fact that people of all races can be, and are, true racists...the sort of racists who are abusive and dangerous to other people.

In my own life, I've been face-to-face with the insensitive people who thought it was a smart idea to harm me and my career simply because I was Armenian-American and not the member of a politically powerful racial/ethnic category. I even had people who told me to my face that the way I was mistreated by affirmative action was good for me because it taught me how it felt to be the victim of discrimination. I've been told to just "shut up" and get over the mistreatment I experienced in the mid-1990s...even though the way I was treated is now illegal in the state of California.

Unfortunately, we live in a sick world where the villains in the Harry Potter movies are blonds and vicious attacks on real people are tolerated...simply because the white victims are seen as deserving their mistreatment and fate. As far as I'm concerned, those who suggest that opposition to Obama's policies is rooted in white racism are partners in Kayne West's abuse of Taylor Swift. Like him, they are guilty of stepping on kittens and they deserve to be boycotted and shunned... In a larger sense, however, we have a solemn responsibility to address the vicious ideology which facilitates the abuse of others for the achievement of so-called "lofty" goals.