Less Marxism is More: Dr. Drew Offers Tips For a Better State of the Union Address

The bottom line is that Obama is overwhelmed by this job intellectually and physically. His best ideas have left us with 9.4% unemployment. In the middle of the mid-term campaign, he made a silly mistake and raised the visibility of the Ground Zero Mosque issue.

I think I know why Obama never released copies of his undergraduate transcripts from either Occidental College or Columbia University. His poor marks would be consistent with the utter failure of the stimulus package to live up to all the Democrat party hype.

My recommendation as a political scientist who has read a lot of history and taught courses on the office? Lay-off the vodka martinis, the cigarettes and the nicotine gum. Bring in new people who understand that the Midwest Academy, Bill Ayers, Alice Palmer and Rev. Wright all have the wrong recipe for turning around the U.S. economy.

Olbermann Gone from MSNBC - What a Relief!

I've followed Keith Olbermann's rants on Twitter and at MSNBC. I got into a fight with him, on-line, a week ago when I insisted he should have resigned for suggesting it was a good idea to "murder" Hillary Clinton at the height of the 2008 Presidential primary campaign. My best retort was to post, simply:


The fact that he engaged me, on-line, over the course of two days - January 9 & 10, 2011 - struck me as a sign that his priorities were misplaced and that, perhaps, he was ill. It is with some satisfaction that I can go into the weekend sure in the knowledge that his reign of terror at MSNBC is finally over.  I wanted to send him a "message" and got the following message: "You have been blocked from following this account at the request of the user."

The real Cornell, the School of Arts and Sciences (average SAT: 1,325; acceptance rate: 1 in 6 applicants), is the only Ivy League school at Cornell and the only one that grants a Bachelor of Arts degree.


Keith went to an affiliated state college at Cornell, the College of Agriculture and Life Sciences (average SAT: about that of pulling guards at the University of South Carolina; acceptance rate: 1 of every 1 applicants).

I guess his ratings have been hurting for a while and I wasn't the only one who really couldn't stand him and his odd, emotionally out of control anger.  See, Countdown ratings.

Sadly, this is exactly what Sarah Palin predicted would happen in reaction to efforts to link the Tea Party or Republican officials for the actions of the AZ shooter. I'm hoping this become a vivid example of why leftism is such a dangerous ideology. The best book on the topic is Thomas Sowell's "Conflict of Visions." Mr. Fuller's behavior is a reminder that the greatest political violence in the last century came from the left - Lenin, Stalin, Mao and Pol Pot. 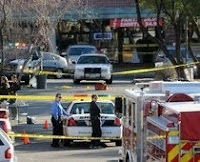 As a political scientist, I never felt comfortable with the suggestion that the AZ shooter, Jared Lee Loughner, was influenced by rightwing rhetoric. The tip off, for me, is that he shot multiple victims and cited, as one of his favorite books, The Communist Manifesto. I don't see how anyone influenced by free market, constitutional principles would ever admire the work of Karl Marx.

Now, however, we have new evidence of the thinking of Mr. Loughner through posts he made - under the name erad3 - at a UFO/conspiracy website called Above Top Secret (ATS).

There is a treasure trove of information at this site and I have no doubt that publication of this material will have a profound influence on how Loughner's behavior is interpreted by the MSM and Blogosphere.

One of the most touching moments, ironically, is when a fellow member of ATS correctly identifies Loughner's paranoid schizophrenia and urges him to get help:

I have maybe made a mistake is my assessment of your avatar, because for that to be the case, you'd have to be at least somewhat rational, but I think youre frankly schizophrenic, and no that's not an amateur opinion and not intended as an uninformed or insulting remark, you clearly make no sense and are unable to communicate. I really do care. Seek help before you hurt yourself or others or start taking your medications again, please. Maybe, it'd be better for some there be an infinite source of haldol or cogentin then fiat currency.


As far as I can tell, the other members at the ATS site are pretty quick at catching up with Loughner's games and adept at mirroring back to him his nonsensical syllogisms. Loughner's philosophy is apparent in comments where he writes: "Wouldn't be hilarious to make fun of your boss?" He also writes briefly in a manner that hints at the alienation caused by the capitalist system:

The majority of our world is dedicated to a workplace.
The workplace could have a effect on the belief system.
This not possible for the majority of the world to preach that fact.


Loughner also launches some standard material that looks typical for an anti-Bush, anti-war, the U.S. is committing war crimes under the Geneva Convention perspective. Loughner writes:

Look into what a war crime is from the Geneva Convention.
This could shed some light on the current situations of the world.
Could this be effecting the experience and circumstances of life?


Loughner also expresses disbelief and hostility to the Christian faith in a manner that more closely matches the views of the left than the views of either Glenn Beck or Gov. Sarah Palin. Here's a sample of one of Loughner's rants:

He also displays a cynicism toward the market system and basic materialistic ends. It is another surprise to read Loughner's comments when they seem more aligned with those of the left than the right as follows:


Unfortunately, I think Loughner's actions make more sense - from his perspective - if you see Rep. Giffords as part of an evil government plot, tied to her Space Shuttle Commander husband, to rip off people who don't understand that space travel is a myth created by the government.

The best article I've seen, based on this new information, comes from Jim Lindgren at The Volokh Conspiracy website. Lindgren focuses on illustrating Loughner's anti-war views.

Quick Thoughts on Keith Olbermann and the Ideology of AZ Shooter 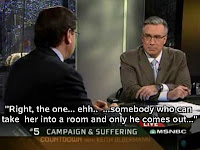 I was at a meeting of Republican activists this morning when I saw the news regarding the mass shooting in AZ. It is sad that liberals like Keith Olbermann so quickly sought to use this violent event as a tool to silence independent and conservative voices.

For the record, I just checked out Jared Lee Loughner's YouTube site.

It's a mixed bag of foolishness. He favorited a YouTube video that features a flag burning. One of his videos concludes with the phrase, "I'm able to control every belief and religion by being the mind controller!" He says one of his favorite books is The Communist Manifesto. As far as I can tell, he looks like a pot-smoking atheist addicted to nonsensical syllogisms. Folks should review Keith Olbermann's comments attacking Hillary Clinton in 2008 before they start blaming the innocent for the actions of a "mind controller."

In the meantime, our thoughts and prayers are with the victims in AZ tonight.