I was on Twitter figuring out how to translate my tweets into Indonesian when I got into a "conversation" with two people who from Indonesia. In their view, I was all wrong about Muslims. They thought I would benefit by visiting Indonesia to see how peaceful the Muslims were toward their Christian neighbors.

In response, I did what I used to do as a conservative American government professor face-to-face with out of touch liberal colleagues: I confronted them with powerful counter evidence. In this little YouTube video the Muslims in Indonesia do not appear to be very friendly to their Christian neighbors. The irony, of course, is that President Obama grew up in Indonesia and he is fond of suggesting that Islamic adherents in that country are not as vicious or as extreme as the people we are fighting in Iraq or Afghanistan.

This YouTube video features a Muslim woman from Indonesia saying that she lives in a Muslim dominant neighborhood and that the Christians should just build their church somewhere else.

As an Armenian-American, I know from family experience how dangerous it is to be a Christian in a Muslim dominant country. My grandmother lost her mother and many of her relatives to the Armenian Genocide. As such, I recommend this YouTube video as a chilling and ironic reminder that Muslims - even the ones in Lolo Soetoro's home country - are inspired by a text which facilitates the abuse and mistreatment on non-Muslims. We would be unwise not to pay attention to the mistreatment of Christians at the hands of Muslims all over the world.

How Low Can It Go? President Obama's Job Approval Numbers 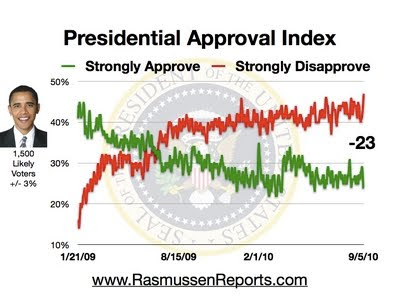 I think it is important to get the word out that if you are unhappy with President Obama, then you are not alone. For example, the newest Rasmussen Reports daily Presidential Tracking Poll for September 5, 2010 shows that only 24% of the nation's voters Strongly Approve of the way he is performing in his role as president.
I was struck to learn that nearly a majority of likely voters report themselves as being in strong disapproval mode. According to Rasmussen Reports, forty-seven percent (47%) Strongly Disapprove, giving Obama a Presidential Approval Index rating of -23. (Rasmussen's methodology is to substact the number of folks reporting Strong Disapproval from those reporting Stong Approval.)
As a political scientist, I'm not quite sure why this is a better way of reporting public opinion regarding Obama than simply presenting the overall approval rate. This issue, as I understand it, is that actual opinions on the President are complex and difficult to boil down to simplified numbers.
Nevertheless, I'm persuaded that the people are generally tolerant and well-informed about the direction of their country. Not everyone is as interested in politics as I am, but that doesn't mean that folks have not evolved their own, rational, simplified ways of detecting whether or not we are going down the drain.
These new numbers represent the highest level of Strong Disapproval and the lowest Approval Index daily rating ever recorded for Obama. My gut feeling is that we can trace the blame to unhappiness over health care reform, displeasure with the 9.6% unemployment rate, and the combination of Obama's endorsement of the GZM and his wife's lavish vacation in Spain. Even if you are not a trained chef, you can tell when things just taste bad.
John C. Drew, Ph.D. is an award-winning political scientist.
- September 05, 2010 No comments: