To Pull or Not to Pull: MSNBC’s Andrea Mitchell Runs Clip of Sen. McCain Saying Its Time We Pulled the Trigger on Iran 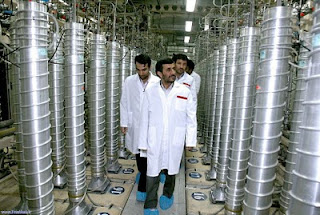 Nevertheless, from the point of view of the U.S. political cycle and the risks we face in Iran, I’m thinking that now is probably a good time for Israel to “pull the trigger.” Among Republicans, I'm pretty sure they will be cheered by the Israeli strike and pleased to see that force is used to put down the Iranians who obviously wish us ill. In fact, a large majority of us – conservatives and independents - would applaud this action. For example, a recent Fox News/Opinion Dynamics poll of 900 registered voters on April 6-7, 2010 shows 61% support in response to the question worded: "Do you support or oppose the United States taking military action to keep Iran from getting nuclear weapons?"

Among prominent Democrats, however, I think we can safely predict that “pulling the trigger” will not be a popular option. As far as I can tell, liberal Democrats are always against war and it does not matter who the bad guys are or what kind of weapons they have on the launch pad. Ironically, even foreign wars have a way of dividing us up along partisan lines. Given this context, the natural question would be when is the right time to “pull the trigger?” For example, from the standpoint of U.S. politics, is the time to pull the trigger now, just prior to November, after November, or in the Spring (or later) of 2011?

If Israel pulled the trigger now, I think it is safe to say that this action would energize Republicans and independents, while – at the same time – it would stoke a heated debate about whether or not Israel did the right thing. Such a debate, in my view, would assist Republicans in contrasting themselves with the Democrats who would be busy attacking Israel for making a pre-emptive strike. Consequently, the debate would provide Republicans with a nationalized public issue that broke in their favor.

Ironically, if Israel waited to “pull the trigger” just prior to November, then it would create a temporary rally-around-the-flag effect for President Obama that might impact the mid-term elections. Obama’s popularity would rise temporarily as he took normal actions to insure that the conflict between Iran and Israel did not escalate into World War III. Right now, we have a lot of military strength in Afghanistan, right near Iran, so it would be difficult for Russia or China to do much to defend Iran – if that was their objective. If Israel attacks just prior to the November elections, then it would strengthen the military image of Obama, and – perhaps - give him an excuse -- if he wishes to temporarily gain support by demonstrating a modest level of allied defense for Israel’s actions. I do not see how Obama could do anything to harm Israel under this timing scenario without making things worse for his Democrat party.

If Israel pulls the trigger right after November, then Obama will have almost total freedom – electorally speaking - to do whatever he wants included issuing a strong attack on Israel and potentially supporting sanctions against Israel as part of a larger effort to distract people from the poor U.S. economy. This would be the best option for Obama because he would build his ties to his base, long before he needed to pretend to be a centrist again in time for the 2012 Presidential election. From the point of view of Israel, this looks like the worst time to pull the trigger to me.

If Israel attacks in the Spring of 2011, the issue will not have too much of a partisan electoral impact within the U.S. Israel would be facing a less conservative Congress, and would still be in the doghouse with President Obama. This analysis would be particularly poignant if, as Defense Secretary Gates suggests, Iran could expedite matters and have a nuke by the Spring of 2011. So, my conclusion is that the sooner Israel pulls the trigger, the better it will be for her in ending an existential threat from Iran and for assisting her true and loyal friends in the United States.

Glorious Leader Gap: Obama Never a Professor - Never Even Close to Being a Professor.

During the 2008 presidential campaign, I got caught up in the controversy regarding whether or not Sen. Barack Obama was really a law school professor. Obama referred to himself as a “law professor,” but - in truth - he had only served as a Senior Lecturer. (This was a non-tenure track position that did not require achievements in research or publication.) To the general public, this probably looked like a minor case of a politician fudging his resume. As a published, award-winning political scientist, however, I thought Obama’s claims demeaned the once - somewhat honorable - image of genuine law school professors at the University of Chicago.

Doug Ross floated a blog post reputing to be the comments of a highly ranked University of Chicago law school professor which - in my mind – rings true as a plausible reaction from a tenured law school professor, someone who probably went into this line of work back when it was a sign of extraordinary intelligence, and not simply the expression of affirmative action window-dressing or compliance with politically correct dogma. According to the report in Ross’s blog, http://directorblue.blogspot.com/2010/03/to-be-lawyer-or-not-to-be.html, his source shared that:

I spent some time with the highest tenured faculty member at Chicago Law a few months back, and he did not have many nice things to say about "Barry." Obama applied for a position as an adjunct and wasn't even considered. A few weeks later the law school got a phone call from the Board of Trustees telling them to find him an office, put him on the payroll, and give him a class to teach. The Board told him he didn't have to be a member of the faculty, but they needed to give him a temporary position. He was never a professor and was hardly an adjunct.


Off and on, I have been an adjunct professor myself. I soon learned that my colleagues would be ticked off when I skipped out on staff meetings. As the anonymous source indicates, Obama had a similar experience:

The other professors hated him because he was lazy, unqualified, never attended any of the faculty meetings, and it was clear that the position was nothing more than a political stepping stool.


Personally, I thought it was unfair for me to attend faculty meetings as an adjunct when I was earning a fraction of the earnings of the real professors. Even worse, as a consultant, I lost time I could bill my clients when I was attending these fun, but unproductive meetings.

As much as I understand that Obama might be disinterested in attending faculty meetings, I also think his claim that he was a law school professor is likely to offend those of us who have competed for that honor through research, publication, and lonely scholarship. As Ross’s source relates:

According to my professor friend, he had the lowest intellectual capacity in the building. He also doubted whether he was legitimately an editor on the Harvard Law Review, because if he was, he would be the first and only editor of an Ivy League law review to never be published while in school (publication is or was a requirement).


Obama’s fib that he was a law school professor reminds me of all the people who seem to think that just because they earned their M.A. that they have achieved the equivalent of a Ph.D. To those of us who have gone on and earned our Ph.D.’s, however, the completion of an M.A. seems to be a minor accomplishment compared to the intellectual challenge of conducting original research and grappling, on a day-to-day basis, with the exhilarating (sometimes heart-breaking) process of creating new knowledge.

The Doug Ross blog post is a telling reminder President Obama was never a professor. He was never even close to being a professor. Professors publish articles, compete for tenure, conduct research, win grants, and speak at national and international conferences. They attend faculty meetings where their expertise and skills are challenged in lively debate. In this world, the time professors spend teaching classes, creating exams and grading papers – the majority of Obama’s work as a Senior Lecturer – has only limited significance and prestige.

Social Justice as a Code Word for Socialism: Remembering the Young Barack Obama 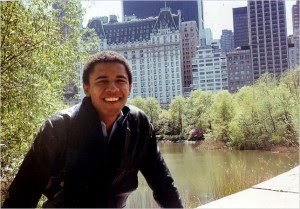 I’m excited I stumbled over Richard Wolffe’s article, “When Barry Became Barack,” Newsweek, March 31, 2008. This piece covers the period around when I first met the young Barack Obama, during his sophomore year at Occidental College in Los Angeles.

My review of this article is particularly relevant right now because of Glenn Beck’s assertion – earlier this month - that “social justice” is basically a code word for Marxist socialist ideology, even when it is used in a church setting. Understanding the role of “social justice” as a code word for something a lot more sinister certainly helps us make better sense of the new information released in Wolffe’s article.

Wolffe points out, for example, that young Obama immediately dove in to the social circles of the “progressive” students. He writes: “Barry Obama met Eric Moore fresh on arrival from Hawaii at Occidental College in Los Angeles. The two roamed in the same circles, gravitating toward friends who considered themselves "progressive," including many with international backgrounds.” As a 1979 graduate of Occidental College, I was part of that same progressive/international network of friends and activists.

Wolffe writes that Obama honed his sense of right and wrong during these years at Occidental. In particular, Wolffe cites one of my old colleauges, Occidental College political theory professor Roger Boesche. Boesche says Obama "…hung out with the young men and women who were most serious about issues of social justice." Prof. Roger Boesche report he taught Obama two political-science courses and knew him as Barry at the time. (I knew him as Barry too.)

In one instance, Obama politely confronted his professor over lunch at a local sandwich shop called The Cooler. "He'd gotten a grade he was disappointed in," Boesche recalls. "I told him he was really smart, but he wasn't working hard enough." Other students might have backed off at that point. But not Obama. He politely told Boesche he should have gotten a better grade. Even today, Obama recalls the demeaning mark. He told journalist David Mendell, author of a recent book called "Obama, From Promise to Power," that he "was pissed" about it because he thought he was being graded "on a different curve." Boesche still insists he gave him the grade he deserved.

Later, I taught with Boesche while he was a visiting professor in the political science department at Williams College. Boesche was still a socialist by 1989 and was still an ardent advocate of John Rawls, A Theory of Justice. Boesche was proud, in a paper he wrote, that he had gotten a message from Rawls basically confirming Rawls’ socialist perspective. All of this, of course, should just do more to confirm the reliability of my impression that the young Barack Obama was already an ardent socialist Marxist revolutionary when I met him in the fall of 1980.

Intellectually, we should gain a fresh and realistic perspective on the true nature (and depth) of Barack Obama’s ideology when we combine Beck’s understanding of social justice, with Boesche’s comments on Obama’s social justice friendships, and my comments that Obama was undoubtedly a Marxist revolutionary between 1980-1981.