I was pleased to learn that Rep. Katie Hill (D CA-25) has resigned today. A copy of her resignation letter is saved below. You can also access this document through this link. 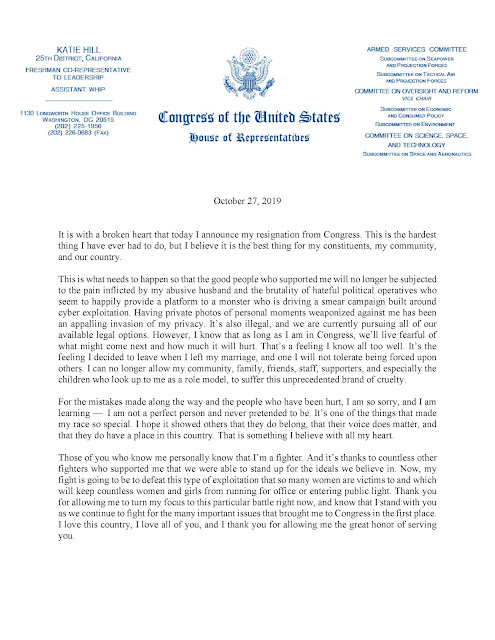 In the end, even House Speaker Nancy Pelosi, could do nothing to protect her. Pelosi issued a statement saying, “Congresswoman Katie Hill came to Congress with a powerful commitment to her community and a bright vision for the future, and has made a great contribution as a leader of the Freshman class.”

“She has acknowledged errors in judgment that made her continued service as a member untenable,” Pelosi wrote. “We must ensure a climate of integrity and dignity in Congress, and in all workplaces.”
Katie Hills resignation today was a striking contrast with her statement earlier this week which indicated she was going to stick around and fight the charges against her. In a letter sent to constituents on Wednesday, Hill acknowledged that in the final years of what she called an “abusive marriage,” she began a relationship with the unnamed campaign staffer.

“I am going through a divorce from an abusive husband who seems determined to try to humiliate me,” Hill said in her statement last week. “I am disgusted that my opponents would seek to exploit such a private matter for political gain. This coordinated effort to try to destroy me and the people close to me is despicable and will not succeed. I, like many women who have faced attacks like this before, am stronger than those who want me to be afraid.”

She denied having an affair with a congressional staffer. This is the charge that started a House Ethics Committee investigation. Apparently, Hill's determination to stick around got weaker as more damning evidence appears which demonstrated her "errors in judgment." For example, media reported a series of purported late-night texts in which her estranged husband, Kenny Heslep, called into question Hill’s drinking. Other texts showed the female staffer involved in the “throuple” expressing concerns about Hill's drinking. On top of all of this, the texts revealed Hill was drinking on top of her existing psych meds. (I'm guessing she has been diagnosed with a bad case of bipolar disorder.) The situation was so bad that Hill had been missing her flights back to Washington.

I think Hill's bizarre behavior and what looks to me like a co-occuring mental health challenge inadvertently illustrated the statistical evidence which shows bisexuals to have a higher incidence of mental health problems compared to the rest of us.

According to research reported by the Human Rights Campaign HRC, "Although the LGBTQ community reports high rates of anxiety and mood disorders, recent statistics show that bisexual people are far more likely to experience mental health issues than either lesbians or gay men within the community." Among adults, like Hill, who report they are bisexual, approximately 40 percent have considered or attempted suicide, compared to just over a quarter of gay men and lesbians. HRC’s Health Disparities Among Bisexual People found that “when compared to heterosexual adults, bisexual adults reported double the rate of depression and higher rates of binge drinking.”

In her resignation letter, Katie Hill mentioned her role as a role model for girls. She wrote:


I know that as long as I am in Congress, we’ll live fearful of what might come next and how much it might hurt,” Hill wrote in Sunday’s statement. “That’s a feeling I know all too well. It’s the feeling I decided to leave when I left my marriage, and one I will not tolerate being forced upon others. I can no longer allow my community, family, friends, staff, supporters, and especially the children who look up to me as a role model, to suffer this unprecedented brand of cruelty.


Hill did not seem to understand that her status as a role model had been permanently erased much earlier in the week thanks to photos which showed her, naked, smoking a bong, with what appeared to be a Nazi-era tattoo in her bikini area.

“For the mistakes made along the way and the people who have been hurt, I am so sorry, and I am learning – I am not a perfect person and never pretended to be. It’s one of the things that made my race so special,” Hill wrote. “I hope it showed others that they do belong, that their voice does matter, and that they do have a place in this country.”

So, Rep. Katie Hill is leaving us with the suggestion that those with profound cases of mental illness, those who are most likely to show profound "errors in judgment" should nevertheless be allowed to make the rules that control and manipulate the rest of us. I don't think so...

Experiments in Photoshop: 2001 a Space Odyssey and Drew Painting Mash Up

I've always been a fan of Stanley Kubrick's 2001: A Space Odyssey. I thought I'd see what it would look like to insert one of my oil paintings into one of his most iconic scenes. Here's the result followed by the original. 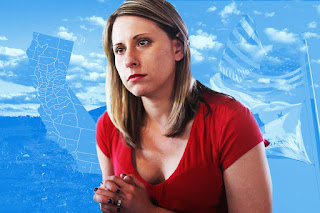 Why does Katie Hill need two lovers? One for the sex, the other to bring her the pills and the booze.

What do dental dams and Congressional ethics have in common? Both are ignored by Katie Hill.

Why did Katie Hill get naked and comb her staff member's hair? To keep from wigging out.

Why did Katie Hill run for office? To meet even more people to screw.

Katie Hill has two addictions. Luckily, she's licked them both.

What did Katie Hill say when she reunited with her campaign staff girlfriend. "Long tongue no see."

What does Katie Hill call oral sex from her girlfriend? Campaign consulting.

SANTA CLARITA, CA - The Rep. Katie Hill story just keeps getting worse. The woman who looked like a decent alternative to an existing Congressman has now been revealed as a hopelessly out-of-control sex addict with a severe case of what appears to be bipolar depression. Even worse, she is drinking and smoking pot on top of her bipolar meds. This is an insane combination which helps explain her weird, reckless, unethical behavior. 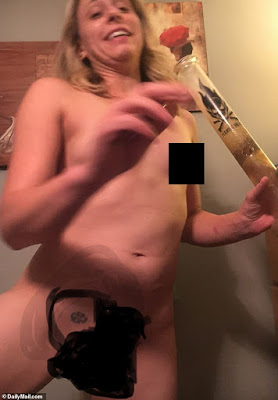 Going where domestic papers fear to tread, the DailyMail.com has released politically questionable photographs of Democrat Katie Hill posing naked with a tattoo of what appears to be a Nazi-era Iron Cross on her bikini line - all while smoking a bong. The 32 year-old libertine has also been pictured naked brushing a young woman's hair, who they have identified as Morgan Desjardins, 24, from Santa Clarita, California.


Hill's wild lifestyle has been revealed through a cache of texts and intimate photographs obtained by DailyMail.com. As sources revealed, Hill and her husband  Kenny Heslep posted her naked photos online under a thread called 'WouldYouF**kMyWife'.

SANTA CLARITA, CA - For a long-time, I have thought of my hometown of Santa Clarita as a modern day Pottersville. Pottersville, as you may recall, is the fictional counterpart of Bedford Falls, the town where George Bailey grew up in the Frank Capra classic, "It's  a Wonderful Life." Pottersville is a decadent sinful place, the place that Bedford Falls becomes when George's guardian angel, Clarence, grants his wish to "have never been born."

I led the slow growth movement out there in the early 1990s. I was disappointed when our efforts to protect the community failed. (I didn't understand enough about fundraising and organizing at the time.)

The big news today is that the Congresswoman in the area - Dem. Rep. Katie Hill - has been compromised by a nude photo showing her combing the hair of a 22 year old female staff member Morgan Desjardins. 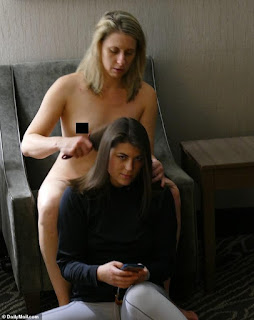 As far as I can tell a number of hot looking photographs and text messages show that Dem. Rep. Katie Hill was involved in a long-term sexual relationship with this young female campaign staffer. The woman, Morgan Desjardins, was hired by Hill in late 2017 and quickly became involved in a “throuple” relationship with Hill and her estranged husband, Kenny Heslep.

Katie Hill got into office thanks to a weak Republican incumbent - the lame son of one of my political opponents a lifetime ago - and a massive $5 million plus contribution from billionaire Michael Bloomberg to buy television ads which ran in the district.

Thanks to our enterprising friends at Redstate, we are now free to flip through several photographs showing Hill and the staffer kissing along with a photograph of a nude Rep. Hill brushing the staffer’s hair. Additional intimate photographs of the women were also provided to Redstate.

True Pundit reports that Rep. Hill also reportedly had a year-long affair with her now Legislative Director, Graham Kelly. Reportedly, once Hill’s husband found out about this affair he filed for divorce. While this and Hill’s “throuple” relationship all involve consenting adults, there are some legal and ethical issues. Members of Congress, for example, aren't allowed to have sex with their employees. A review of FEC records for Hill’s 2018 and 2020 campaigns reveals that the staffer was first paid in November 2017, with her payment classified as “salary,” making her an employee.

Ultimately, the real message here is that Katie Hill is too stupid and too careless to represent her district. How hard is it to avoid posing for nude photos of yourself combing your staff member's hair?

The Republicans in Santa Clarita now have an opportunity to flip this seat red, but only if they demonstrate the responsibility needed to recruit a strong, impressive candidate to oppose Katie Hill next year. Such a task should be as urgent as finding where Uncle Billy lost the day's deposits from the Bailey Thrift & Loan.