It Takes a Village: Rethinking the Prodigal Son with Ken Baugh 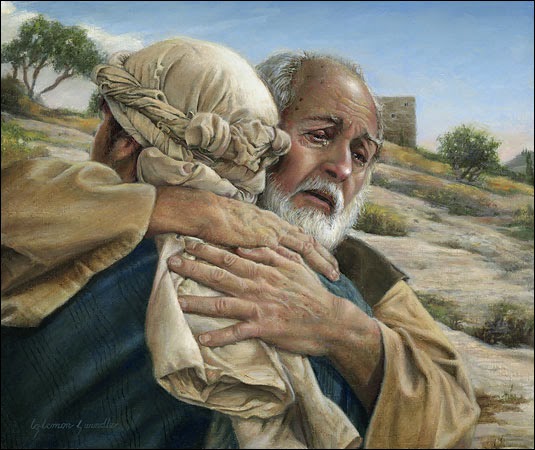 Trish and I visited Capo Beach Church in San Clemente yesterday to hear our ex-pastor, Ken Baugh, speak on the topic of the prodigal son. I say ex-pastor when I should say real pastor, since I feel like a step-child who absolutely refuses to acknowledge the new dad in mom's life. At any rate, our real pastor set the prodigal son story into a fresh framework regarding how village life took place in the time of Christ.

The gist of the message is that it makes all the difference in the world to see the prodigal son and his father as living in the center of a small village surrounded by a protective wall. This, of course, is in contrast to my usual vision of the father as living on a large hacienda in the middle of a ranch in the middle of nowhere. As far as I can tell, Baugh's fresh perspective is inspired, in part, by Kenneth Bailey's book, Finding the Lost Cultural Keys to Luke 15, (St. Louis, MO: Concordia Publishing House, 1992).  A later version of this book, The Cross & the Prodigal: Luke 15 Through the Eyes of Middle Eastern Peasants (Downers Grove: Intervarsity Press, 2005) was honored in 2006 as a "Year's Best Book for Preachers" by Preaching magazine.

The gist of the argument is that the prodigal son is a much more exciting story when you see the story retold from the perspective that both the father and son were living in a tight compact village. In this interpretation, the son's demand for his inheritance looks more disrespectful, and his sudden desire to cash it out and move to another country looks like a means of escaping the offended villagers. Likewise, the father's running out to meet his prodigal son looks more like an attempt to protect the son from the hostility of the villagers than a made dash of parental enthusiasm. Finally, the feast itself appears to be a way of rehabilitating the prodigal son into the life of the community.

As such, this version of the study - as a tool of insight into the personality of God - leaves us with an image of a God who is willing to sacrifice everything to win back his errant son. In a larger sense this interpretation is quite significant, as I understand it, since Muslims have used this story to suggest that Jesus's sacrifice is unnecessary to securing God's forgiveness. When we reinterpret the story as a tale of the father's sacrificial love, then the Christian meaning of the story becomes more clear.

At any rate, it was great fun to see Ken Baugh in action again. This was one of his most interesting sermons and a real eyeopener when it comes to understanding Jesus in his own historical context. It was refreshing to see Ken Baugh in good form. I should also report it looked to me like there were about 18 of us Coast Hills Church folks in the crowd. Our attendance was a subtle reminder for Ken Baugh that we have his back and that we miss him, his message and his trustworthy scholarship.