Palin Hearts Reagan: Her Success Shows Why It Mattered to Alaskans 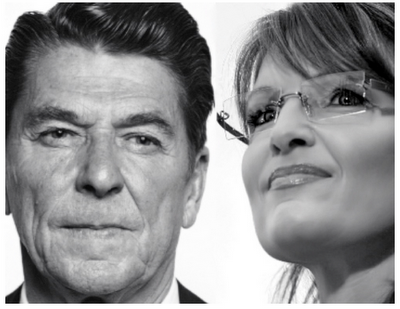 The life stories of charismatic leaders invariably reveal that they are ordinary people who take big risks. Even Napoleon Bonaparte, for example, was dismissed by his Austrian father-in-law, Francis I, as simply “a gambler.”

These hardy risk-takers, however, almost always rely on a handful of techniques to improve their odds of success – including a startling willingness to pattern their lives on a pre-existing model of political and military success. Young Abraham Lincoln was fascinated by the life story of General George Washington – the first U.S. President. Saddam Hussein modeled his political career on the example of the USSR’s Joseph Stalin. Fidelity to an existing political leadership model assists charismatic leaders in maintaining their extraordinary levels of self-confidence. It can also – if they pick wisely – provide them with sure solutions that make a difference.

A strong contemporary example of this phenomenon came to me from reading Sarah Palin's new book Going Rogue: An American Life (2009).

In Going Rogue, Palin indicates that she displayed an early interest in the ideas and leadership style of President Reagan while she was still in college. "I looked forward to every poli sci lecture,” she writes, “I attributed my enthusiasm to patriotism and a fascination with current events. I was also eager because this was the 1980s and our study centered on one of the most inspiring individuals ever to occupy the White House, Pres. Ronald W. Reagan."

In particular, I was impressed by the way the young Sarah Palin dug into one of the most important practical secrets of Reagan's success when she writes that "I also appreciated his focus on a handful of overarching themes, such as reining in the intrusiveness of government, building a strong national defense, and cutting taxes.”

In November 2006, of course, Sarah Palin became both the youngest person, at 42, and the first woman elected as the Governor of Alaska.

Consistent with the examples of other charismatic leaders, Palin indicates how she drew confidence from Reagan’s example: “It was a humbling experience to step in to lead an administration that would serve a state of this size and diversity,” she writes, “ I knew we could face the challenge with anticipation and without a sense of overload that we observed Ronald Reagan's principles: pick your agenda issues and focus on those; empower and motivate your departments and staff to implement your vision in other areas. Reagan concentrated on a few key issues and knocked them out of the park. That gave him the political capital to effect change in many other policy areas.”

In her case, she reasoned that if she focused on Alaskan resource development, fiscal restraint, and ethical government, she would create the victories and momentum that would allow her to later deal with “…education, services for special needs and the elderly, job training, unemployment, and social ills in rural Alaska."

True to her vision, Gov. Palin cut back on the legislature’s construction projects in her first budget and won a bipartisan ethics reform bill – all in less than a year. By August 2008, she had negotiated a natural gas pipeline deal. All in all, Gov. Palin experienced extraordinary success as measured by her high popularity with Alaska voters. Her successes in office would attract the attention of the McCain campaign in the form of an offer to serve as the Republican Vice-Presidential candidate in 2008.

For me, the lesson of this story is that it is useful for voters to ask candidates which politicians do they most admire? More than most of us suspect, the answer to this seemingly innocence question may be extremely useful in predicting their later success in elected office.

I agree and I enjoyed reading your article. Thank you.