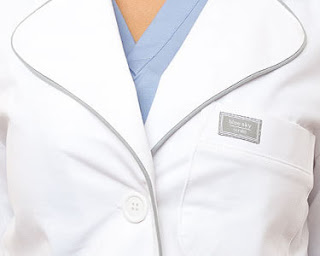 As a political scientist, I'm sensitive to the way clothes impact a political or military or business leader's power and influence.  David Brooks, for example, is now famous for predicting Barack Obama would make "a very good president" because of the crease in his trousers.  Accordingly, I'm not surprised a similar lesson has been learned by doctors, nurses, surgeons, dentists, veterinarians, and other medical professionals.

Thankfully, the folks at Blue Sky Scrubs have developed some of the highest quality, impressive scrubs for their growing client base.  I particularly admire their new lab coats.  These lab coats have high quality piping in slate grey or white.  What can I say?  I have been a sucker for piping on jackets and coats ever since I became of fan of Patrick McGoohan's work in the iconic, The Prisoner, television series.

Blue Sky Scrubs also offers great looking nursing uniforms which will brighten the days of both the patients and the nurses who wear them.  I'm working with a business coach who is helping me take my efforts to the next level.  Ironically, he wants me to wear better clothes...a uniform, in a sense...which will look the same each time clients meet with me.  If high quality clothing is important to my success - and President Obama's success - then I'm certain it will make a big difference in the most important show of all - the daily activities of a medical professional.