The Tale of Two Road Trips: Sanitizing Obama’s Radical Past 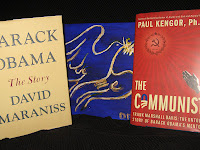 A striking clash between those who feel a profound duty to report that the young Obama was nurtured by Marxists, socialists and Communists, and those who think it is a better idea to erase this information from the public record is on display in two current books. One book provided key, politically significant details of a heated debate I had with the young, Marxist-Leninist Obama over Christmas break 1980. The other book only confirmed that young Obama was in my vicinity at the time. The gap between how Paul Kengor covered Obama’s Christmas break in The Communist, and how David Marannis covered this same moment in Barack Obama: The Story is chilling.

As an eye witness to young Obama’s Marxist-Leninist ideology, I count myself among those who think it is our duty to report the truth about young Obama, especially if it helps us understand the persistent, contemporary influence of Frank Marshall Davis, the Communist who became young Barack Obama’s mentor. I do not think it is any exaggeration to suggest that in the long-run mainstream media’s failure to confront the reality of young Obama’s ideological extremism is almost as important than the reality of Obama’s tenure in office.

Kengor, a political scientist, builds on his long-standing expertise in Cold War politics to write a balanced and well-documented account of the life, writing and political beliefs of Frank Marshall Davis (1917-1995). To keep the focus on Davis’s political views, Kengor modestly leaves out the unpleasant, possibly salacious details of Davis’s earthy self, including Davis’s roles as a producer of both visual and written pornography. Davis’s pornographic writing is so deviant that it describes ugly details of child sexual abuse. Skipping this aspect of Davis’s unseemly life, Kengor seeks to create a credible account of Davis’s thinking which addresses genuine examples of racially motivated hatred which scarred young Davis’s life, while still focusing unremitting attention on how Davis excused the brutal violence of Lenin, Stalin, Mao and Ho Chi Mihn.

In the context of describing how, possibly, Frank Marshall Davis influenced the thinking of young Barack Obama, Kengor shares a warts and all transcript of an interview he did with me on a radio program in 2011. If I had known my words were going to appear in a book, then I would have used more of my rusty Toastmaster’s skills to eliminate the unnecessary words in my oral communications that morning. Nevertheless, Kengor’s objective is to provide readers with every opportunity to judge my character and credibility for themselves. I am embarrassed, but I am okay to take one for the team.

Surprisingly, I am not the only one who appears to be more than eager to help Kengor set the record straight. The back story behind Kengor’s book features the crucial role so many of Kengor’s acquaintances and mentees have played in digging up archival information on the writings of Frank Marshall Davis. Kengor, in particular, credits Spyridon Mitsotakis – an enterprising student at New York University - who discovered that every issue of Frank Marshall Davis’s Chicago Star was available at NYU’s Tamiment Library, a library which also holds the archives of the Communist Party USA (CPUSA).

The political significance of Mitsotakis’s discovery is sobering when Kengor writes that the Library of Congress one asserted it had archives of the Chicago Star, but “...upon taking a closer look, discovered it does not.” Even worse, Kengor shares: “The reels of micro-fiche from the Chicago Star seem to have disappeared from the shelf.” (p. 300) Accordingly, Kengor’s new book is the timely result not only of his skill as a writer, but also of his ability to inspire the heroic efforts of an all volunteer research work force in the midst of a national crisis.

I am a big fan of Paul Kengor, so it pains me to offer even the most gentle criticism. Nevertheless, my only complaint with Kengor’s work in The Communist comes on page 299 where Kengor writes: "More than that, Frank even more likely explains how and why our president, as a young man at Occidental College circa 1980, was possibly once on the Marxist left." As an eyewitness to young Obama’s ideological extremism, I would have more comfortably switched out "...possibly once on the Marxist left" to read “...solidly on the Marxist left.” If I had had the opportunity, I would have made the case for stronger language on that point, not only because of my face-to-face observations of young Obama, but also because of my familiarity with his social and intellectual environment.

When I debated young Obama, I did so in the company of two of young Obama's closest friends, Caroline Boss - the radical student leader who became part of the composite character Regina in Dreams, and Hasan Chandoo - the Marxist student who was Obama's sophomore year roommate. If the real life Obama had been to the right of either Boss or Chandoo as Maraniss reports, then I am certain I would have noticed this gap.

Part of the reason I can still remember such details is because it was no small thing to consider yourself a Marxist in 1980-1981. Similar to Obama, I remember I chose my friends carefully too. As I recall, our nation was still deep into the Cold War and my heartfelt ideology controlled my career choices, influenced the mentors I picked, and placed me on a certain collision path with some of the most powerful forces in the world. I would say that this is the ideological and cultural space that Obama, Boss and Chandoo and I all shared in December 1980, as potentially grandiose -- or as actually silly -- as this thinking seems today.

As Kengor writes, "Nonetheless, whatever our biases, reality is reality, history is history, truth is truth." After reading Maraniss's book, I'm chilled that a Pulitzer Prize winning presidential historian like Maraniss does not seem to share these common sense assumptions.

Maraniss’s book is particularly frustrating to me because he verifies -- through the testimony of Sohale Siddiqi, who was Obama’s roommate in New York -- that young Obama was on a road trip in the San Francisco area at precisely the time I indicate I debated the young Obama. Maraniss's account also suggests Chandoo made a brief visit to the San Francisco area too during Christmas break 1980.

Unfortunately, Maraniss did not interview me. I think it is quite strange that Maraniss does not mention any of the reports of my debate which have surfaced in books by other authors including Michael Savage’s insightful appreciation of Marxist ideology in Trickle Down Poverty or Stanley Kurtz’s well-researched investigation of Obama’s extremist ties in Radical-In-Chief.

My frustration with Maraniss is only enhanced because he has revealed that my old college era girlfriend, Caroline Boss, provided Obama with the name of the composite character “Regina.” The name “Regina” was the name of Boss's  working-class grandmother. I think this is highly significant because Obama tells us in Dreams that the character “Regina” helped inspire his decision to become a community organizer in Chicago. As Obama writes:

Now, with the benefit of hindsight, I can construct a certain logic to my decision, show how becoming an organizer was part of that larger narrative, starting with my father and his father before him, my mother and her parents, my memories of Indonesia with its beggars and farmers and the loss of Lolo to power, on through Ray and Frank, Marcus and Regina; my move to New York; my father’s death.” (pp. 133-134.)

Along with Maraniss’s verification of the significant role Boss played in young Obama’s life, Mariniss simultaneously verifies other key elements from my first February 2010 testimony as recorded by Ronald Kessler. As careful comparison shows, Maraniss’s new book ends up supporting my original take on young Obama’s friends including the radical beliefs of both Hasan Chandoo and Caroline Boss, and their mutual closeness to Obama.

Unfortunately, Maraniss’s account does little to help us understand President Obama’s attitude toward our capitalist system. Of course, this is a difficult challenge. I am still trying to wrap my brain around Obama’s bizarre suggestion that the success of my management consulting business is more dependent on the pavement outside my office than the cold calls I make every Thursday. From my perspective, Adam Smith is right. My success as a businessman and a scholar seems more dependent on the favors I have done for others than on anything others have done for me.