As an ex-Marxist I am somewhat hypersensitive to the conversion stories of other ex-Marxists. In my case, I remember where I was the exact moment I realized I no longer believed in the ideals of Communism: I was walking through the basement of McGraw Hall at Cornell University in September 1983. I had just finished an argument with my radical thesis advisor, an argument which left me thinking he was ideologically blinded and alarmingly out-of-touch with reality. 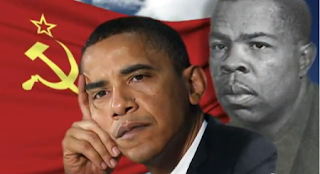 My visceral reaction to Obama’s lack of a conversion story was the topic of an interview I did with a film crew I met last week. I am grateful they took their time to get my face-to-face report on young Obama’s faith in a coming Communist revolution.

As I understand it, the producers will eventually add this footage into a larger documentary called “Simply America” which is “…a journey across our country to give a voice to the American conservative.”

I am still embarrassed for having once wanted the USSR to win the Cold War - even though I last thought this way over 30 years ago. I have a conversion story which explains how I dropped my faith in Communist ideals and how that decision changed my friendships, my mentors and my career goals.

In contrast, President Obama has never expressed remorse for the Marxist revolutionary views he defended during his sophomore year at Occidental College. He has never shared the conversion story that highlights the exact moment when he realized he disagreed with his sophomore year Marxist roommate, Hasan Chandoo.

“If Barack Obama has a story about how he stopped being a Marxist socialist,” I told the film crew, “I’d like to hear it.”

Later, I pointed out that “We never hear where he (Obama) turns to Caroline Boss or Hasan Chandoo and says: ‘Look. You’re wrong. It’s crazy. Communism would actually make us worse off - not better off.’”

“We never hear the story where he confronts Bill Ayers or Alice Palmer or Rev. Wright and tells them ‘Look. You guys are wrong.’”

As a Cuban emigre said: "When Castro ran for president, we didn't know he was a Communist. We thought he was a patriot, a Nationalist. And when we heard he was taking over many of the larger businesses, we thought 'he's just getting the country in order.' Then government people came to my father's hardware store and said, 'This is our store now.' Next they came to our home and said, 'This house is too big for one family. Pick five rooms for yourselves. We are moving other families into the rest of it.'"

We naive lemmings in this country, Republicans and "innocent" Democrats alike, have been "taken." How could everyone have forgotten about the commies who infiltrated our government during WW2? What are the profs teaching in the history classes?

P. S. The last part of your video is unintelligible. I enjoyed what I was able to see and hear.

He never stopped being a Marxist or an Islamist.

His church of twenty years was Black Liberation Theologyk, or Marxist Black Power movements dressed in Christian garb. The roots of liberation theology began in Latin America. Black Liberation Theology was originated by Dr. James Cone that was totally racist against whites to the point of calling for their extermination. He envisioned the Black Man as the first human and whites as a genetic experiment gone wrong.

For 20 years, Obama sat in a church taught by a former Muslim and dedicated devotee to Cone's BLT who spewed filth, falsehoods, and violent hatred of Whites and Jews.

Obama spent all of his life around Communists, Marxists, Socialists, Islamists, anarchists, and every other type of radical Leftist persuasion.

He was a member of the Community New Party. He matched with the original Black Panthers. At Coumbia, Obama hung out with Islamists Edward Said and Rashid Khalidi, former spokesperson for the PLO. Khalidi, Aywers, and Wright all seek the destruction of Israel by replacing it with "Palestine" and eradictating the Jews and Christian who remained.

Obama has also been closely associate with the Muslim Brotherhood in the 1970's - long before he left the doors open for their Trojan Horses to infiltrate the goverment and the military at every level.

It'
s Valerie Jarret, an Iranian born Shiite Muslim, not Obama, who calls the shopts in the White House. She post-posed the attack on OBL three times and was ready to nix the fourth before Panetta overruled her and convinced Chicken Little to pull the trigger.

Now, he gets off blowing pweople away, women and children too, with Predator drones and watches the films of them over and over - like snuff films.

If anything, Obama's ideology has gotten exponentially radical to where he has proven himself, time after time, that he is the biggest threat to America's survival.

Obama mentality is one of a pathological narcissist and his politics are like those of African colonials when Britain occupied most of East Africa.

Commies, Muzzies, and Lefties have formed a union based on union made in Hell, joined together to destroy Western Judeo-Christian society.