I was startled to read a recent opinion article in the Washington Post by Jon A. Shields and Joshua M. Dunn, Sr., called "Forget what the right says: Academia isn't so bad for conservative professors." 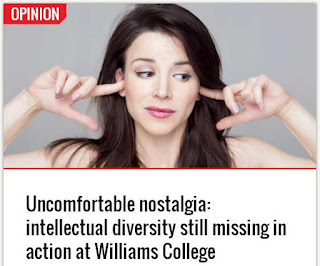 The part of their article that ticked me off the most was the idea that we should be encouraged that conservatives can survive in the academic world if they learn to keep their conservatism as secret until they obtain tenure:

First, conservative professors are not helpless victims -- they have become quite skilled at navigating the progressive university. About a third of the professors we interviewed said they concealed their politics prior to earning tenure. Of course, being in the closet is not easy. (One particularly distressed professor told us: "It is dangerous to even think [a conservative thought] when I'm on campus, because it might come out of my mouth.") But it's also a temporary hardship, since nearly all the conservatives whom we interviewed planned to emerge from the ivory tower's shadows after gaining tenure. Once tenured, conservatives are free to express their politics and publish research that reflects right-wing interests and perspectives. As one put it to us: "I don't mind causing trouble now."

As far as I'm concerned, this is an unacceptable reaction to a vicious, profound discrimination against conservative scholars.

I served for three years at an assistant professor in the political science department at Williams College. At the time, I was one of only three registered Republicans on the staff. I keep an eye on the college and contribute to two of the websites associated with the college that are okay with freedom of speech and freedom of expression. Here are links to two articles regarding my story.

I have never gotten over the way my career as a scholar was gravely wounded due to affirmative action. I am especially bitter about how my doctoral dissertation was belittled by the political science department at Williams College. I developed my thesis while living in poverty, working as a gardener, and surviving without health insurance.

I’m still immensely proud of it.

It hurts me to think of all the young conservative professors who are being harmed by our college and university system. There has to be a better way to confront the dominance of the hard left in our college and university system than simply telling young conservatives to be nice and shut up. It is hard to do both when you are confronting a profound level of injustice.

For some great commentary on this story from another source, I recommend this article by David Henderson called "Academic Conservatives and Survivor Bias." My experience rings true with Henderson's comments that conservatives need to outperform their liberal colleagues in terms of publishing, but the ability to publish is limited by the liberal bias of the journals controlled by the liberals.

This article, of course, reflects my thoughts prior to knowing that my dissertation would win national recognition from the American Political Science Association that summer or that it would be easily published as part of an edited book - almost exactly as I wrote it -- about seven years later. The publisher, Praeger, also published One Day in the Life of Ivan Denisovitch by Alexander Solzhenitsyn.

Nevertheless, I have received some very friendly e-mails from both Dunn and Shields since I drafted this article. My gut feeling is that they needed to play up the cooperation with liberals angle to help get their research published and then the Washington Post distorted their true views to provoke a reaction from their audience. (I guess that worked on me.) I'm looking forward to visiting with Shields sometime soon and sharing my story with him.