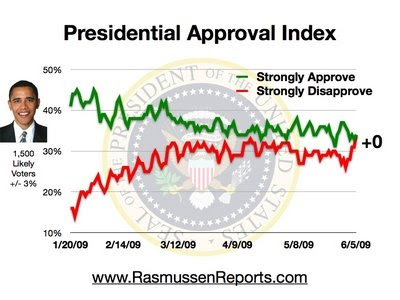 President Obama's job approval rate now equals his job disapproval rate for the first time in his Presidential term. What is the cause of this uptick in disappointment with the new President? My guess is that higher disapproval ratings are tied to negative news stories about the Obama administration. Negative stories have been associated with his desire to close Gitmo and bring terrorists to U.S. territory, with Judge Sotomayor's questionable statements regarding the superiority of the "wise Latina," and bad news about the GM bankruptcy. Traditionally, however, a key factor in personal judgments about Presidential approval is the voter's view of the economy. Here, increased unemployment rates are probably most highly correlated with Obama's declining job approval numbers.
- June 05, 2009