How's That Socialism Working Out for You? Visual Evidence of Failure of Obama Stimulus Plan 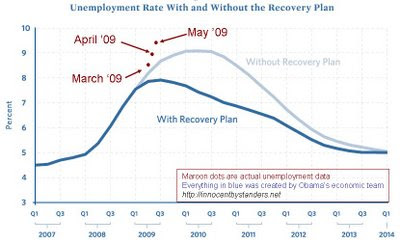 The reality of our present situation is indicated by the magenta dots that show actual unemployment numbers. It looks to me like the curve is going straight up. If so, I think this will be further evidence that after two years of Democrat control of Congress employers are terrified of adding new workers to their payrolls.
- June 06, 2009

I came to the realization of the meaning of taking state bailout money and got mad, then very depressed. Barry O is a much smarter man than I thought.
http://animal-farm.us/change/we-are-all-socialists-now-part-ii-454