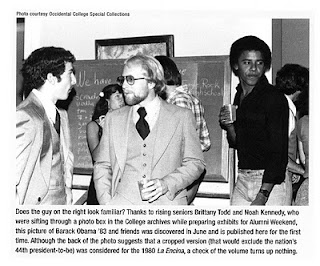 Last year, I was surprised - and somewhat honored - to see that Anna Stoddard the blogger at "Oh, For Goodness Sake" put together a biography on me. The article is here

I thought this forum was a good place to republish a public response to the issues raised by the article by Stoddard, an elderly retiree from New York now living in Mexico. For my immediate, same day, reaction to Stoddard's error-filled article see my story at Patriot Action Net.

The first thing to say is that I was Ann Coulter's T.A. which means I was responsible for grading her papers, grading her exams, and leading her small group discussion sections. I was actually working for her American government professor, Theodore J. Lowi. So, I was actually Lowi's teaching assistant and Coulter was one of my very first students. I think she can also communicate how she saw me evolve from being a young radical extremist into a being a moderate, non-Marxist social scientist. Poor Anna Stoddard, writing in Oh, For Goodness Sake, cannot seem to figure this out and never modified the text even as I brought this issue to her attention almost immediately after she first wrote her article.

(Literally, I called this error to her attention on the same day she wrote this awful smear job, but she did not even acknowledge this bizarre error until 9/19/2011.)

Second, I really was never rejected for tenure as Ms. Stoddard indicates in Oh, For Goodness Sake. The situation was worse than that. The folks at Williams took me off the tenure track in 1989 and really did not even let me compete for tenure. Their story is that my research was sub-par. The irony, of course, is that a month or so later I won the William Anderson Award from the American Political Science Association for the best doctoral dissertation in the nation in my field. My story is that they were hostile to me because I was a man, Armenian-American, conservative and quite vocal in my complaints against affirmative action and those who doubted the wisdom of welfare reform.

The larger issue raised by Anna Stoddard in Oh, For Goodness Sake is my relationship with Obama. In truth, I only met Obama a handful of times. What is missing, however, is that Obama and I were part of an intense cultural sub-group due to our connections at Occidental College. My knowledge of him was built, in part, through my prior knowledge of Mohammed Hasan Chandoo, Caroline Boss, and others  - the young people who were active in campus politics driven by the Democrat Socialist Alliance at Occidental College. I took my status as a Marxist revolutionary thinker very seriously...and so did he. It not a small deal to live your life anticipating the Marxist revolution was coming down the road. The intensitiy of Obama's commitment to Marxism is why my girlfriend could refer to him as "one of us."

As she writes in Oh, For Goodness Sake, Stoddard also misses that I knew the Marxist professors Obama talks about in Dreams of My Father and I was dating the various structural feminists too. I knew the same foreign students and anti-apartheid activists.

By all accounts, my wife and I are taking grave risks because of my willingness to discuss Obama's early Marxist socialist ideology. If Anna Stoddard and her "Oh, For Goodness Sake" blog is the best that liberal Democrats can do to discredit my story, then I think I can stand up to anything thrown at me by http://www.attackwatch.com/  Seriously, we are okay. We have seen no threats against us. Why?  I think most Republicans already believed Obama was a Marxist and most Democrats do not think it is a bad thing in the first place.

Nevertheless, I'm still frustrated and puzzled by why I could not get this story into the media sooner. If it were not for Newsmax, Breitbart TV and talk radio, then I'm not sure it ever would have gotten to the general public.  Nevertheless, I learned in politics that it is important to respond immediately when you are under attack by an untruthful, error-prone person like Anna Stoddard writing in Oh, For Goodness Sake.