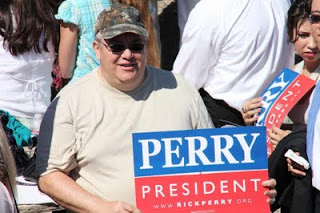 I got a chance to see Gov. Rick Perry of Texas in action this morning. The Orange County Republican Central Committee (OCGOP) held a special rally for him at one of my favorite spots, Rogers Gardens in Newport Beach. As I understand the conventional wisdom, Gov. Perry is not supposed to be really strong as a debater -- something I noticed watching on television last night -- and yet he is supposed to be gifted at making a difference through these personal appearances.

As a political scientist, I am asking myself the question what is it that Gov. Perry does in person that scores points for him.

First, I think one of the most important things that comes across about his is that he is very conscientious. For example, he goes out of his way to sign campaign posters.

One of my political friends showed me a cowboy hat signed by both Gov. Perry and his wife on opposite ends of the brim near the crown of the hat. The signatures were perfect - carefully balanced and carefully written out. My friend believes that 40 years from now this hat will be a sought after item on eBay. I think he is right. It looks like Perry chalked up another supporter in the local Orange County Republican Party, in part, through his kindness and timely attention to detail.

At the event, Perry also went out of his way to recognize, Tom Fuentes, the prior O.C. Republican Central Committee chairman, who is terminally ill from cancer.  Perry did not simply recognize Fuentes once, he weaved comments on Fuentes, into the overall speech he gave that morning to the partisan crowd.

While I managed to shake Gov. Perry hand, I did not do a good job of informing him about Barack Obama's long-standing ties to Marxist socialist thought.  I'm expecting he and his staff have read my posts here and elsewhere and that eventually the truth about Obama's commitment to Marxism and socialism will inform the 2012 campaign in a way that it did not in the 2008 campaign.  I took home a Gov. Perry sign.  I will put up in the window of my office, in large measure, to disturb my Democratic Party neighbors - the one who probably think it is too soon to be focused on national politics.