I thought I should add my two cents regarding the Obama empty chair campaign today. I'm not quite sure what the empty chair is supposed to signify except that Obama has not done a lot to bring back jobs. Sadly, new data shows that family income has decreased during the Obama years. As the Wall Street Journal points out: "For household income, in other words, the Obama recovery has been worse than the Bush recession." 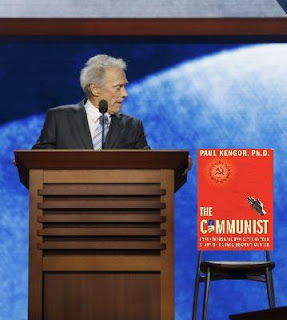 As for me, I'm still mystified about why the Romney campaign fails to dig into the now substantial literature regarding young Obama's ties to Marxist socialist extremists like Frank Marshall Davis - a known Communist on the FBI's watch list. At any rate, this is how I would have set up Mr. Eastwood's famous performance piece at the RNC.