Hypocrites of Hate: Williams College Okay with Black Panther Party Symbol Despite Its History of Torture 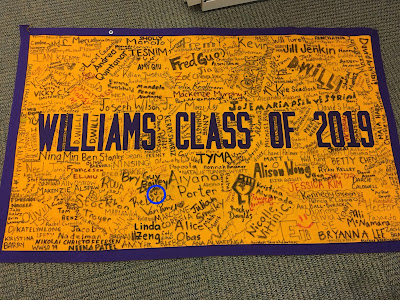 I stumbled over the arrogant hypocrisy of Adam Falk, the soon-to-be ex-president of Williams College this morning. The campus police noticed that someone had scrawled a tiny "KKK" on the  Williams Class of 2019 banner.

According to Falk, ..."the symbol “KKK” has long been used as a weapon, to intimidate and instill fear. We cannot yet know the writer’s intention, but the nature of a weapon is that it does harm regardless of intent. When someone inscribed those letters, or defaced the banner with them afterwards, they harmed our community."

The irony, of course is that right beside this "KKK" someone has written in a big and bold clenched fist, the symbol of the violent, criminal, black nationalist, Black Panther Party.

Rackley’s fellow Black Panthers tied him to a bed and tortured him by pouring boiling water on his stomach, shoulders, and thighs. It is gruesome to remember that this torture continued for two days.

The horrifying details of his interrogation at the hands of Black Panther Party officials can be heard on an audio tape which was played at the trial of his killers. The whole thing is chilling and frightening and deserves a wider audience, especially at Williams College. You can access the audio recording and a transcript by clicking on the link below:

I do not see how any person, or institution, which truly understands the mental associations connected with the Black Power Party fist would allow it to be displayed in any manner, much less on a class banner. Whoever uses that symbol should remember the pain and suffering of Alex Rackley. They ought to listen to his actual voice...word by word...during the final days of his life.