What Has Trump Accomplished? Useful List from Ray Schneider

What has president Donald Trump done? Since he has been in office and for the first time in eight 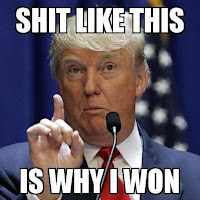 long years the GDP has risen above 3 percent.

9. Pulled out of the lopsided Paris accord

16. The Stock Market is at the highest ever in its history

19. Rollback of A Regulation to boost coal mining

28. Created a commission on child trafficking

29. Created a commission on voter fraud

30. Created a commission for opioids addiction

37. Repealed DOT ruling which would have taken power away from local governments for infrastructure planning

40. Stopped companies from moving out of America

42. Encouraged country to once again - 'Buy American and hire American'

43. Cutting regulations - 2 for every one created

45. Review of all trade agreements to make sure they are America first

53. Negotiated the release of 6 US humanitarian workers held captive in Egypt

56. Has already accomplished more to stop government interference into people's lives than any President in the history of America

57. President Trump has worked with Congress to pass more legislation in his first 100 days than any President since Truman

58. Has given head executive of each branches 6 month time frame, dated March 15, 2017, to trim the fat, restructure and improve efficiency of their branch. (Observe the push-back the leaks and the lies as entrenched POWER refuses to go silently into that good night!)

I hope each and every one of you copy and paste this every where, every time you hear some dimwit say Trump hadn't done a thing!

Love this information. Thanks for publishing it.