Are We All White Supremacists? Ayatollah Chad M. Topaz Decrees All Links to His QSIDE Website From His Critics Will Be Redirected to SPLC 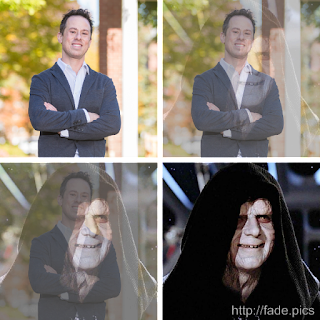 WILLIAMSTOWN, MA - Ayatollah Chad Topaz has decided you are a white supremacist if you are critical of his hateful campaign to get a white female professor fired and to boycott her UC Davis math department. On Facebook, Chad Topaz announced he was setting up redirects for links to his QSIDE website created by bloggers critical of his extremist fatwa. In many cases, he altered his QSIDE website so that clicking on an author's link will now take the reader to a Southern Poverty Law Center web page instead. 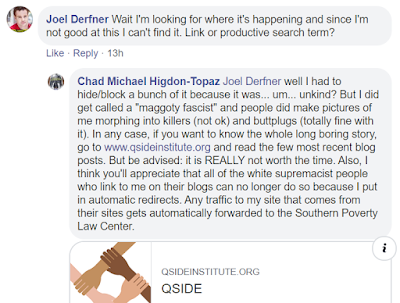 Currently, his list of white supremacist bloggers include many of us who are surprised to be labeled as such including those posting at Anonymous Political Scientist, Campus Reform, Economic Job Market Rumors, Ephblog, The College Fix, The Other Dunwoody, The Reference Frame, Post Tenure Tourettes,  The Leitter Report,  Why Evolution is True and Williams Liberty. Chad Topaz's efforts to redirect traffic away from his website have continued as late as December 10, 2019 when he created redirects for a second article from The College Fix which quotes his colleague Colin Adams who reports that the petition critical of Topaz was signed by four Fields Medalists and eight past presidents of the American Mathematical Society.

All in all, it is easy to defeat these redirects. All you have to do is set up a new link, or link to a third party he deems safe which then links to his QSIDE website. For a while, it was a kick to simply use the Internet Wayback Machine to link to the earlier posts.

Now, however, Chad Topaz has used a simple insert to block the the Internet Wayback Machine from scanning his site. This, of course, may be seen as a good thing because it makes his posts at QSIDE less reliable and less accessible to future researchers.

John C. Drew, Ph.D. is an award-winning political scientist and a former Williams College professor. He is an occasional contributor at American Thinker, Breitbart, Front Page, PJMedia and WND. His pronouns are Master/Commander.
- November 25, 2019