I thought I should share with you the news that my story on meeting young, Marxist Obama has finally made it to the pages of Fox Nation.  In the picture below, I'm speaking on "Why Barack Obama's Past Is More Important Than His Future" at the San Clemente Republican Women's Federated meeting on December 14, 2011. 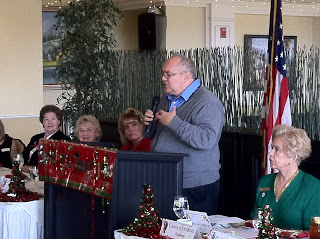 The most prominent liberal response comes from an unnamed blogger, posting at No More Mister Nice Blog.  For a less thoughtful attack, see this piece at News Corpse.

It looks like the best the left can do is argue that I did not see Obama frequently enough to get an accurate view of his ideological beliefs as a sophomore at Occidental College.  My view, however, is that I have been vindicated by the subsequent Obama literature.  After all, a lot of liberals attacked my story on young Obama's ideological extremism in 2008.  Today, however, the Obama literature has moved much closer to my take on young Obama as a Marxist socialist than the technocratic take offered by James Kloppenberg in Reading Obama.

I replied to "Steve" at No More Mister Nice Blog with these comments:

I noticed your article discussing my take on young Obama's ideology was gaining traction on the Internet. I thought it would be a good idea for you to be aware of my responses to the serious charges you level in your article.

In addition, I think it is important to get out the story of my own conversion out of Marxist socialist thought. See, Dr. Drew's Conservative Conversion Story

All in all, I find it difficult to understand why reasonable people don't accept my story after David Remnick published The Bridge. It seems perfectly clear to me that the Obama literature has moved in the direction I indicated was correct instead of the direction suggested by Prof. Kloppenberg in his book, Reading Obama.

My take on young Obama has also been supported by substantial research done by Stanley Kurtz in his book, Radical-In-Chief and by Jack Cashill's Deconstructing Obama. Given the large number of publications that are consistent with my take on young Obama's ideological extremism, I would expect bloggers like you to confront the evidence and not engage in abusive ad hominem attacks. Please feel free to print this in your blog if it is helpful to you and your readers.

The end of the story was priceless since "Steve" wrote back only to say: "I have nothing to say to anyone who uses "research" and "Jack Cashill" in the same sentence. Don't bother me again. You're an idiot."

All in all, I think Obama is in trouble. I don't think it is plausible to suggest I was mistaken about young Obama's extremist ideology.