Giving Up All My Secrets: Dr. Drew Interviewed by Historian David J. Garrow

I'm honored to announce I was just interviewed by Pulitzer Prize winning historian, David J. Garrow, even though I suspect that anyone who stepped foot on the Occidental College campus and met young Obama between 1979-1981 has received a similar visit. 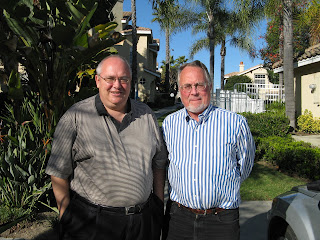 In my case, it was a particularly humbling experience. Right now, I feel like I endured a trip to the dentist. When I first heard from Prof. Garrow by e-mail I was not sure it was really him. I checked out some of his YouTube videos and then asked him to give me a call so I could be sure I was talking to the real guy and not some deranged Occupy Wall Street (OWS) protester.

As you may know, Garrow is the winner of the 1987 Pulitzer Prize for Biography and the Robert F. Kennedy Book Award.  His book, Bearing the cross: Martin Luther King, Jr., and the Southern Christian Leadership Conference, was probably the most comprehensive book written about the life of Dr. Martin Luther King, Jr.

At first, I was not certain it was a good idea to speak to him or not.  I called around to some of my friends and quickly figured out that although Garrow is a liberal he does have a reputation for doing fair and accurate historical work.  In Bearing the Cross, for example, he reported on how Martin Luther King, Jr. cheated on his wife and the impact that FBI disclosures of this information impacted the last three years of King's life.

Garrow taped his interview of me.  My understanding is that nothing I said will be published until President Obama is out of office.

Nevertheless, it is not often that you meet with a presidential historian and I was a little startled by the experience.  To start off, I was surprisingly nervous.  I almost dumped a glass of ice tea on him.  It was also surprisingly unpleasant.  I prepped for the interview by sorting through old photographs and rereading about 30 old notes and letters from the 1980-1981 era of my life.  It was a shocking reminder of the emotional immaturity of my early 20's.  I confessed to one of my friends, for example, that my ratings as an instructor in the political science department at Cornell University had improved since the last semester because I had stopped laughing out loud at the students who said stupid things.

I also found out that presidential historians have an awkward role in informing people of the deaths of those who used to be in their social circles.  In my case, I discovered that one of the Occidental College radical leaders I knew, Gary Chapman, 58, had died of a heart attack last December.  I had mentioned Chapman as a prominent leader of the student anti-apartheid movement in Meeting Young Obama earlier this year.

Nevertheless, Garrow made it pleasant to reminisce about old friends and to learn who got married to who, who succeeded in life, and who crashed and burned in a spectacular fashion. My attitude, of course, is that I'm going to be deceased for a lot longer than I have lived and consequently I provided him with my complete honesty - flaws and all.

At a certain point, I have decided, you can no longer feel embarrassment for the things you have done, you can only expect future generations will learn from your mistakes.