As I have studied up on the local Republican party, I have become startled at its poor decisions and the sheer hostility of some of its members to the new energy offered by the Tea Party movement.

It is no secret that me and a lot of the Tea Party/912 folks have gotten upset about poor decisions made by local Republican leaders regarding their non-endorsement and later positive endorsement of the disgraced Sheriff Corona and later their majority support for our RINO congressman, Rep. John Campbell. Nevertheless, I think one of the best examples of the sickness of the local Republican brand is the hateful attacks coming from people like Mary Young. Personally, I think she needs less volunteer work and more anger management classes. 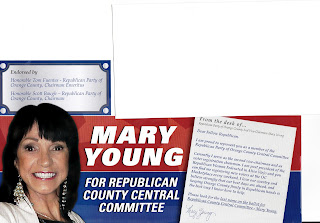 I think it is fair to say that Mary Young has been one of the most consistent figures who has been at the heart of the most embarrassing decisions made by the local Republican Central Committee. She has adopted a rigid pro-incumbent ideology which apparently blinds her to the damage foolish decisions do to the Republican brand. It is a pattern of behavior which has sparked increased activism among those of us who incorrectly assumed the operation of the local Republican Central Committee was in better hands.

Ironically, I would like to point out that if you read Young's campaign mailer, she seems like a nice enough, well-balanced person.

In real life, however, she is not so nice. After she was appointed to the O.C. Fair Board by Gov. Arnold Schwarzenegger, she used her power to exploit the system and gouge the poor fair goers while piling up perks for herself.

I have seen complaints about her from the parent of one of the Young Associates who interacted with her. Moreover, I have read complaints coming from female volunteers who have been turned off by her behavior. I have been subject to her rage myself. It is not pleasant. Here's a more accurate photo of what Mary Young looks like in real life, by the way. 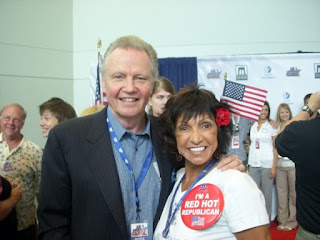 As a political scientist, I taught courses on child abuse and neglect. I'm a little hypersensitive to anger in others and quickly pick up on the normal precursors of unusual behavior - trauma, drug abuse, drinking, anger management issues, and stress. As a published author in the field of child welfare and protective programs, I have no tolerance for abusive people or for the co-dependents who look the other way at the abusive physical and verbal behavior.

After all, you can be one of the most beautiful and creative actresses of your era, like Joan Crawford, but after a couple of mistakes you end up being Mommy Dearest.  For now, however, I think it is fair to say Mary D. Young needs to retire and spend more time addressing the demons that apparently undermine her usefulness as a local Republican leader.