Door-to-Door with Dr. Drew: Regretting I Only Have One Life to Give to New Republican Party

As you may know, I have been walking precincts today in support of U.S. Senate candidate Orly Taitz and U.S. congressional candidate John Webb. I've done this in Massachusetts and California in the past. I may be getting too old for it now. 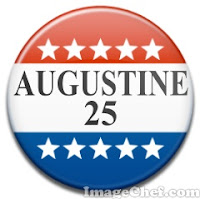 The first thing I noticed is how dangerous it is to walk unfamiliar streets. The initial day out, I was walking with my friend Dave Duringer who is a great gun rights trust attorney and an insightful observer of conservative politics. I almost tripped and fell three times. Dave kept me from falling head first down a steep flight of three steps outside a home in Mission Viejo. He kindly blamed my glasses and eye sight. I know I'm just out of practice and talking too much.

After about three hours of it, we quit and joined the rest of our Tea Party team for lunch and cold water. It was only when I got home I realized I was suffering from symptoms of heat exhaustion.

The second thing I noticed is one of the most consistent finding in political science. Most voters are not as up-to-speed on politics and political news as those of us who make it our business to study politics.

As far as I can tell, no one we met during these walks had ever heard of John C. Drew, Ph.D. or even knew about my report on meeting the young Marxist socialist extremist Barack Obama. It is extremely easy to over-estimate how well people know you or recognize your name. Building name identification, in any area, takes time and money. The situation, in my case, is so bad that I once introduced myself to a person who did not realize I had delivered a speech - with him in the audience - a month earlier. As they say, people need to hear a message about eight times before it finally sinks in. It is humbling to realize the truth of this observation applies to me just like everyone else.

More comically, I have been introduced to others as John Drew and then mobbed with affection when I was reintroduced as Augustine25. (I'm not joking.)

On the positive side, I had forgotten how charming and friendly 95% of the people are when you ring their doorbell and ask for their vote.

Tricia and I went out walking precincts yesterday and today. (I think Dave has given up on me.) I'm a sort of nervous, nerdy type, but people listened to my spiel and offered us water and encouragement. I was startled by how many people thanked me for running for office. Tricia, of course, is a natural campaigner. As a young girl she used to visit gay bars in Laguna Beach to distribute Christian literature. She is cheerful, upbeat, and never forgets to ask for the homeowner's voter.
﻿
﻿ It was also encouraging to see how people maintain their homes. The Republicans we visited have lovingly assembled wonderful gardens with fountains and scuptures. As a group, we Republicans love our cars, trucks and RVs. We skipped the independent voters and Democrats. I think campaigns do that because they do not want timid volunteers turned off by angry, hostile Democrats who slam the door in your face simply because you are a Christian - something that happened to Dave, but not me.

I'm thinking now that we are wrong to only go after Republican households. Right now the Republican brand is damaged in CA and we are probably leaving many Tea Party types without literature and contact simply because they are not registered Republicans. My recommendation is to target neighborhoods with Republican majority voters...but to visit every house. We need to be building our new anti-Marxist anti-Obama party. Visiting only Republicans may turn out our people, but it doesn't build the party or let folks on the fence know we need them and that we are listening to their concerns.

Finally, I had forgotten how much I fear dogs. When I was campaigning for the state assembly in MA, I remember I stopped at a farm house and was immediately surrounded by a pack of five barking dogs. I was approaching each suburban landscape as if a similar feeding frenzy might erupt once again.

I can see why it would be smart for Tea Party constitutional conservatives to raise money and do targetted direct mail. I'm willing to give my life to build a new Republican party, but I only have one life to give.